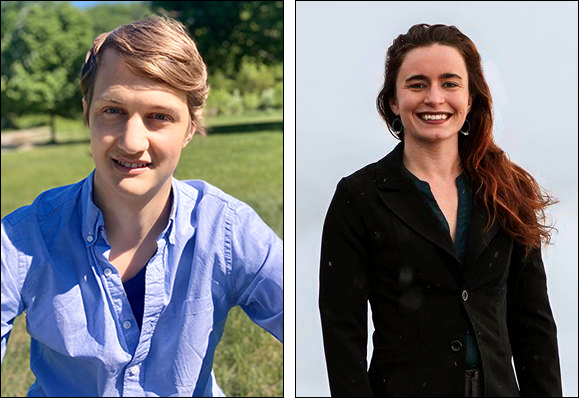 A mathematician who has advanced wave-scattering calculations and a researcher who has modeled the complex interactions driving snow formations will share the 2021 Frederick A. Howes Scholar in Computational Science award.

A selection committee comprised of alumni and friends of the Department of Energy Computational Science Graduate Fellowship (DOE CSGF) chose Thomas Anderson and Kelly Kochanski for the honor. The Howes Award goes to one or two recent fellowship alumni each year in recognition of their research accomplishments and outstanding leadership, integrity and character.

Howes, manager of the DOE Applied Mathematical Sciences Program, was an advocate for the fellowship and for computational science. Friends founded the award after his death in 1999 at age 51. The Krell Institute of Ames, Iowa, manages the fellowship and oversees the Howes Award.

Howes scholars deliver a lecture on their work and receive an honorarium and engraved award at the DOE CSGF Annual Program Review. Anderson and Kochanski will speak during the virtual meeting in July, along with the 2020 winner, Gerald Wang of Carnegie Mellon University.

Anderson, a fellow from 2014 to 2018, received his Ph.D. in applied and computational mathematics from the California Institute of Technology last year. Now a University of Michigan postdoctoral assistant professor of mathematics, Anderson “not only excels technically but also takes on leadership roles in the scientific community and society at large,” the selection committee wrote in the award citation.

Anderson’s thesis research focused on theoretical and computational aspects of wave-scattering problems. “The solvers he created possess a range of highly favorable computational properties,” the committee wrote, including high accuracy and efficient parallelization, in which problems are divided among multiple computer processors for faster solution. “His novel methods offer these highly favorable characteristics at a reduced computational cost” compared to other techniques. Anderson’s approach has led to a new theoretical perspective on the decay problem, “extending the state-of-the-art in scattering theory” to commonly found obstacles that can trap waves.

Kochanski, a fellow from 2016 to 2020, earned her geological sciences Ph.D. last year from the University of Colorado Boulder and now is a senior data scientist in climate analytics for McKinsey & Company. She is “a computational scientist who not only excels technically but also takes on leadership roles in the scientific community and at the intersection of science and society. She embodies the qualities Fred Howes promoted in all early-career scientists,” the selection committee wrote.

Kochanski has studied the formation of snow bedforms – the shapes that dry, windblown snow collects into on the ground. These dunes and ridges, molded through fundamental physical interactions such as fluid flow and granular mechanics, influence the speed at which Earth’s surface and atmosphere exchange mass and energy. Such details have been missing in global climate models.

Outside her research, Kochanski has “distinguished herself through service and leadership to the community at large,” the citation said. In 2015 she and other recent Massachusetts Institute of Technology graduates developed a Chilean version of the International Young Physicists’ Tournament, traveling to Santiago to teach secondary students via hands-on projects. Kochanski helped to sustain the program and hand it off to a second generation of MIT students. She also is an active blogger and a top contributor to the Quora question-and-answer website, earning more than 3 million views on more than 200 essays.

Kochanski also has taken the lead on integrating machine learning into climate science, serving on the core team of the Climate Change AI organization’s Climate Science Community. She also has served as a co-chair on the subject for the Community Surface Dynamics Modeling System.

Anderson’s service includes tutoring disadvantaged students in math at Los Angeles-area middle- and high-schools through Caltech’s RISE program. He was the first applied math representative on his department’s graduate school student advisory council and worked “to ensure effective communication between the graduate student body and the department’s leadership, improving student-focused activities and aiding junior colleagues during recruitment and visitation days,” the committee noted.