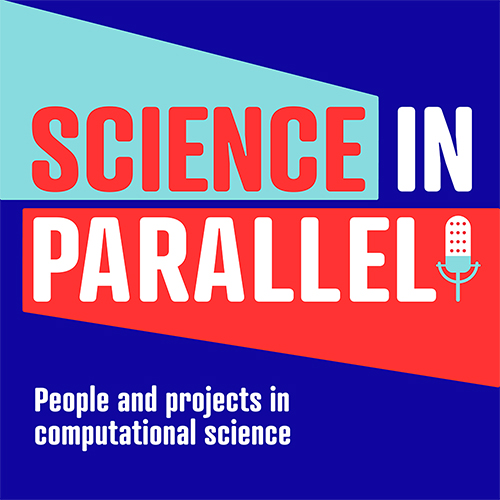 Computers and science are intertwined – and not just as tools that help humans connect and collaborate. With computers, scientists model the earth’s climate, design alternative energy strategies and simulate exploding stars. From laptops to the world’s fastest supercomputers, software innovations and artificial intelligence are reshaping how we interact with mounds of data from healthcare to high-energy physics and how we solve critical problems.

Computational science brings together mathematics, computer science and hardware and science expertise to take on these challenges. In this podcast, you’ll meet the scientists doing this work, learn more about their research and gain insights into the workings of this dynamic field.

In this first podcast season, we’ll focus on the 30th anniversary of the Department of Energy Computational Science Graduate Fellowship (DOE CSGF) program. All our guests will be fellows or alumni of the program. We’ll discuss a lot of science, including alternative energy, artificial intelligence and climate change, two-dimensional materials and hot, dense electrons. But we’ll also discuss the life experiences that shaped these scientists’ career paths and how they are influencing their fields and mentoring others.

Science in Parallel is produced by the Krell Institute. Our theme music was composed by Steve O’Reilly. Follow us on Twitter or contact us by email.

Sarah Webb has worked as a science writer, editor and communicator for more than 15 years, writing for Nature, Science, Chemical & Engineering News, The Scientist and many other publications. She logged countless hours in the chemistry lab while completing a Ph.D. at Indiana University, but her favorite course was in computational biochemistry. Sarah is Krell’s Associate Science Media Editor. 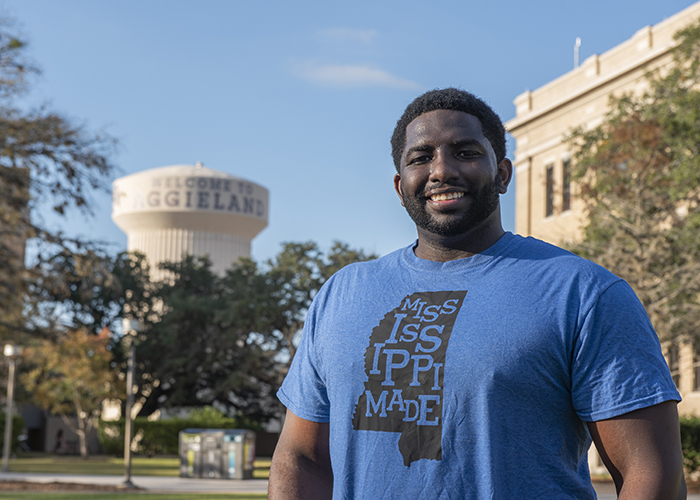 Curiosity, mentors and a summer working in concrete with his grandfather shaped Quentarius Moore’s science career studying 2-D materials. He recently completed his fourth year as a DOE CSGF recipient, while pursuing a chemistry Ph.D. at Texas A&M University. He completed both his bachelor's and master's degrees in chemistry at Jackson State University in Mississippi. Read more about Quentarius and his graduate research in the 2021 issue of DEIXIS.

Quentarius was a co-author on this recent ACS Nano paper about molybdenum disulfide structures published by researchers from Texas A&M and Sandia National Laboratories.

From the Episode: Quentarius is a member of the 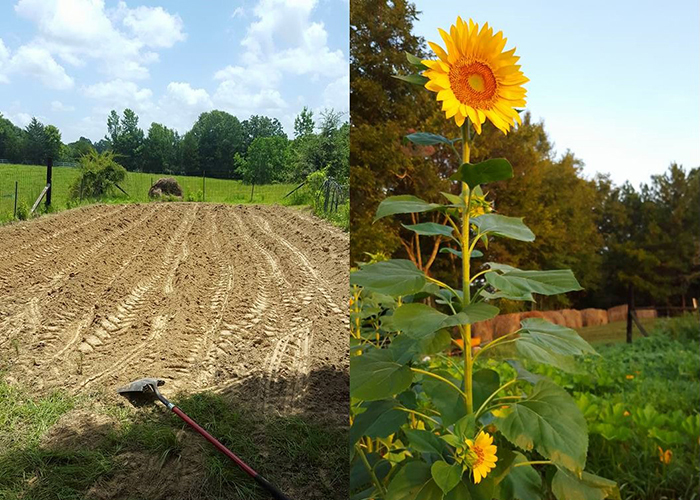 NSF Center for the Mechanical Control of Chemistry (CMCC), which is led by James Batteas of Texas A&M. Funded initially by a $1.8 million grant, researchers focus on ways to apply precise forces to coax or alter chemical reactions at surfaces and interfaces. The CMCC includes researchers from Texas A&M the University of California, Merced; CUNY Advanced Science Research Center; Northwestern University; the University of Pennsylvania; and McGill University.

He also mentioned the Louis Stokes Alliances for Minority Participation Bridge to Doctorate program, conferences hosted by the National Organization for the Professional Advancement of Black Chemists and Chemical Engineers (NOBCChE) and the beautiful crystals of his favorite element, bismuth.

Above image: Quentarius tells how his 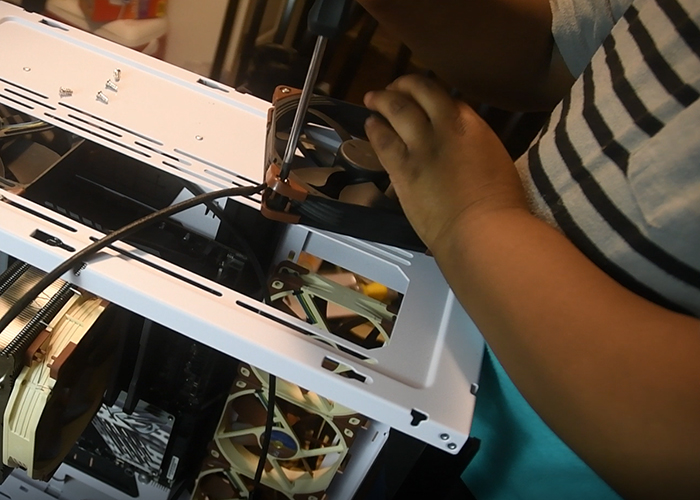 grandfather’s patience and persistence guided his work ethic, including a story about this 20-by-20-foot plot that became a productive garden in summer 2015.

Image right: Quentarius built this computer workstation with his younger brother in 2020 during the COVID-19 pandemic.

One of today’s hottest areas of computational research could help build better solutions for one of global society’s steepest challenges. Three early career computational scientists – Priya Donti, Kelly Kochanski and Ben Toms – talk about AI’s potential for understanding and predicting climate shifts, supporting strategies for incorporating renewable energy, and engineering other approaches that reduce carbon emissions. They also describe how AI can be misused or can perpetuate existing biases.

Working at this important research interface requires broad knowledge in areas such as climate science, public policy and engineering coupled with computational science and mathematics expertise. These early career researchers talk about their approaches to bridging this gap and offer their advice on how to become a scientific integrator.

Priya Donti is a Ph.D. student at Carnegie Mellon University, pursuing a dual degree in public policy and computer science, and a fourth-year DOE CSGF recipient (at the time of recording). She is also a co-founder and chair of the volunteer organization, Climate Change AI, which provides resources and a community for researchers interested in applying artificial intelligence to climate challenges. Priya was named to MIT Technology Review’s 2021 list of Innovators Under 35. Read more about Priya and her work in the 2021 issue of DEIXIS.

Kelly Kochanski completed a Ph.D. in geological sciences at the University of Colorado, Boulder in 2020 and works as a senior data scientist in climate analytics at McKinsey & Company. Kelly was a DOE CSGF recipient from 2016 to 2020, and her graduate research was featured in the DEIXIS 2020. She also is profiled in the 2021 issue as one of this year’s recipients of the Frederick A. Howes Scholar Award.

Ben Toms also finished his Ph.D. last year at Colorado State University studying atmospheric science and is a 4th year DOE CSGF recipient. He has founded a company, Intersphere, that provides weather and climate forecasts up to a decade into the future. 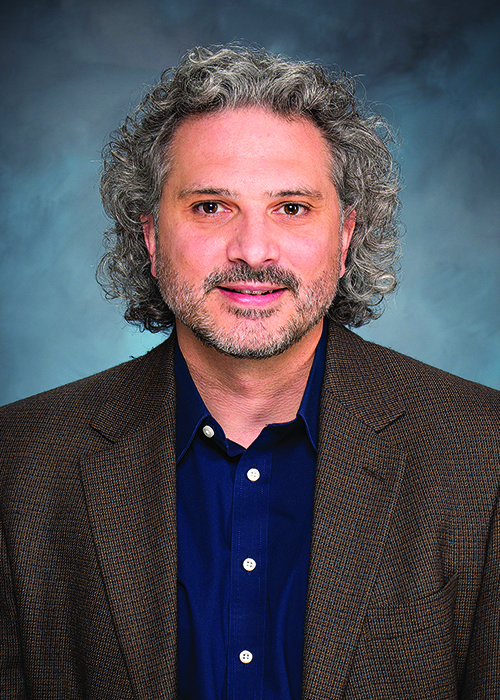 Jeff Hittinger of Lawrence Livermore National Laboratory embodies the term scientist-chimera. He talks about the many scientific hats he’s worn simultaneously – computer scientist, applied mathematician and physicist. As director for the Center for Applied Computing (CASC) and as co-principal investigator for the DOE CSGF, he wears many more. He talks about scientific success, leadership and the tricks he’s cultivated for communicating science to broader audiences through the Livermore Ambassador Lecture series.

Jeff was a DOE CSGF recipient from 1996 to 2000 while earning his Ph.D. in aerospace engineering and scientific computing at the University of Michigan. He was one of the first recipients of the Frederick A. Howes Scholar Award and received the 2021 James Corones Award in Leadership, Community Building and Communication.