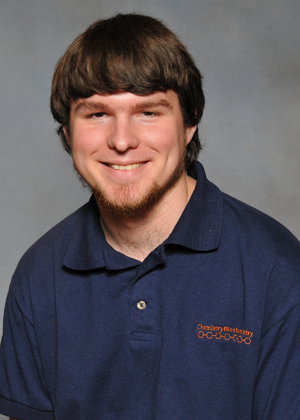 A University of Texas at Austin postdoctoral researcher who has accelerated and improved exacting chemical structure and reaction calculations, advancing the potential for alternative energy sources and other discoveries, is the 2015 Frederick A. Howes Scholar in Computational Science.

Devin A. Matthews, who earned a 2014 Ph.D. in chemistry from UT-Austin, will receive the award in July at the Department of Energy Computational Science Graduate Fellowship (DOE CSGF) program review in Arlington, Virginia. The award honors a recent DOE CSGF graduate for the quality of their research and their exceptional leadership, integrity and character.

Howes, manager of DOE’s Applied Mathematical Sciences Program, was a leading advocate for the fellowship. He died unexpectedly on Dec. 4, 1999 at age 51. The Krell Institute of Ames, Iowa manages the fellowship and oversees the Howes Award.

A selection committee of DOE CSGF alumni and friends chose Matthews in recognition of “both his exceptional technical achievements as well as demonstrated leadership and character.”

Matthews is a postdoctoral researcher in UT-Austin’s Science of High-Performance Computing Group and its Institute for Computational Engineering and Sciences. He previously was in the Department of Chemistry and Biochemistry, where he earned his doctorate under John Stanton.

As a graduate student and now in his postdoctoral research, Matthews has focused on developing algorithms and software for quantum chemistry problems. Such calculations are key to understanding the details of atomic and molecular interactions, particularly the energy needed to form and break chemical bonds.

“By developing both algorithms and software of unprecedented precision and efficiency, Devin has made significant contributions to expanding the boundaries of computational quantum chemistry,” the selection committee wrote in its citation. He has particularly focused on coupled cluster methods, which describe the complex interactions of electrons in systems of atoms and molecules. Coupled cluster methods yield an approximate solution to the famed Schrödinger equation describing a system’s quantum state.

Working with other researchers, Matthews developed techniques that accelerate tensor contraction, a mathematical operation key to coupled cluster methods. The techniques he developed are more efficient and allow greater accuracy than other methods. Many of his projects are incorporated into other codes, including CFOUR, a quantum chemistry package Stanton and Jürgen Gauss of Germany’s Universität Mainz developed.

Matthews also has developed Aquarius, a quantum chemistry framework. It “provides the most advanced computational infrastructure for tensor calculations in terms of efficiency, different data types, parallelization, and software design,” the committee wrote. “Devin’s leadership in the initiation and development of this project speaks highly to his willingness to challenge the bounds of state-of-the-art in computation, to take responsibility, and to follow through with dedication and drive.

The committee also cited Matthews’ actions as a mentor and a leader, noting his willingness to initiate research projects and to supervise and assist colleagues. “He serves as a role model to his peers and an effective advocate for the field of computational science.”

Matthews, who grew up in Tulsa, Oklahoma, will lecture on his research and receive an honorarium and engraved award at the DOE CSGF program review. He also will be featured in the 2015 issue of DEIXIS, The DOE CSGF Annual, to be published this fall.