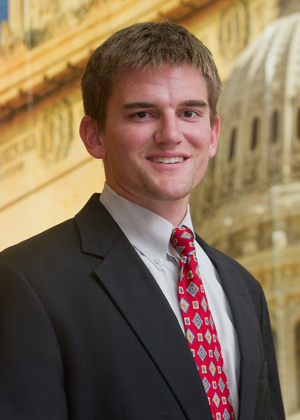 A research engineer with expertise in identifying the uncertainty in computer simulations is the 2014 Frederick A. Howes Scholar in Computational Science.

Hayes Stripling IV, who earned a 2013 Ph.D. in nuclear engineering from Texas A&M University, will receive the award on July 15 at the annual Department of Energy Computational Science Graduate Fellowship (DOE CSGF) program review in Arlington, Virginia. The award honors a recent DOE CSGF graduate for the quality of their research and their exceptional leadership, integrity and character.

The award commemorates Howes, who advocated for the fellowship as manager of DOE’s Applied Mathematical Sciences Program. He died unexpectedly on Dec. 4, 1999, at age 51. The Krell Institute of Ames, Iowa, manages the fellowship and oversees the Howes Award.

A selection committee of DOE CSGF alumni and friends noted Stripling’s major contributions to uncertainty quantification (UQ), which puts a number on how much a simulation’s output can be trusted, and to algorithm development for high-performance computers.

Stripling, a fellow from 2009 to 2013 and now employed at ExxonMobil Corp., focused his doctoral research on UQ in predictive simulations of advanced nuclear reactors. “This … required the mastery of a breadth of topics from statistics, applied mathematics, nuclear physics, and computer science, which he achieved while maintaining a perfect scholastic record,” the committee wrote in its citation.

In his research, Stripling identified and modified an obscure numerical method to solve equations arising from his uncertainty quantification work. He developed a technique to evaluate how sensitive a nuclear reactor attribute is to changes in parameters governing the system. He implemented the method with novel algorithms for powerful computers. Stripling also developed computational techniques to analyze tradeoffs between computation, data storage, and data movement.

The committee wrote that Stripling has “distinguished himself as a leader who inspires trust and confidence” and as someone who “exudes integrity.” His activities include serving as vice president of the Student Engineer’s Council at Texas A&M and as director of human resources for the National American Nuclear Society Student Conference in 2008.

At the DOE CSGF program review, Stripling will deliver a lecture outlining his research and receive an honorarium and engraved award. He also will be featured in the 2014 issue of DEIXIS, The DOE CSGF Annual, to be published this fall.