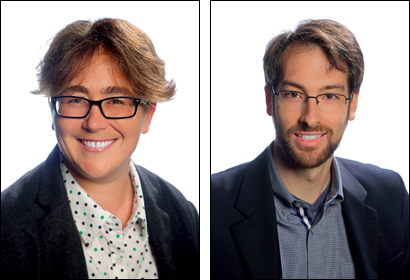 A postdoctoral researcher specializing in mathematical methods for computationally predicting matter’s basic properties and a university professor focusing on heat transfer in energy systems are the 2016 Frederick A. Howes Scholars in Computational Science.

Aurora Pribram-Jones and Alexander Rattner will receive their awards in July at the Department of Energy Computational Science Graduate Fellowship (DOE CSGF) Annual Program Review in Arlington, Virginia. Each year, one or two recent DOE CSGF graduates are chosen for the award in recognition of their research accomplishments and their outstanding leadership, integrity and character.

Howes, manager of the DOE Applied Mathematical Sciences Program, was an advocate for the fellowship and for computational science. Friends founded the award after his death in 1999 at age 51. A committee of DOE CSGF alumni and friends selects the honorees. The Krell Institute of Ames, Iowa manages the fellowship and oversees the Howes Award.

Rattner also graduated in 2015, from the Georgia Institute of Technology with a Ph.D. in mechanical engineering. He’s now an assistant professor of mechanical and nuclear engineering at Pennsylvania State University.

Pribram-Jones studies density functional theory (DFT), a method to calculate electron interactions in molecules and predict a material’s properties, such as magnetic behavior. Her work, the committee wrote in a citation, has made “important contributions to theoretical condensed matter physics and computational science. Notably, she has been recognized by her mentors for her broad interdisciplinary background, her talent for engaging many different scientific communities in her research, and her ability to think logically and deeply about fundamental issues in density functional theory.”

At Penn State, Rattner’s Multiscale Thermal Fluids and Energy Lab studies two-phase flows, like those found in power plants, refrigeration cycles and many industrial processes. His research, the committee wrote, “spans an impressively broad range of topics related to modeling and design of sustainable thermal systems. His contributions include modeling the magnitude of waste heat available over various temperature ranges tagged by geography, design of particularly efficient heat pumps and development of a new (computational) … framework” for simulating heat transfer during phase change (such as from liquid to gas) in flowing fluids comprised of multiple phases. The committee also praised Rattner’s experimental skill and his knack for integrating results with computer models.

As an undergraduate student, Rattner taught Philadelphia middle- and high-school students about sustainability and engineering. At Georgia Tech, he organized mini-courses to improve students’ computational skills and worked with inner-city youths as a Science Learning: Integrating Design, Engineering and Robotics Teaching Fellow through the National Science Foundation. He’s also mentored high school, undergraduate and graduate students. On a more technical note, Rattner has contributed open-source software to the scientific community for a range of applications, the committee noted.

Pribram-Jones, the committee noted, “has an exceptional record of outreach and leadership.” At UCI she worked with students struggling with math and provided lectures on quantum mechanics for her fellow graduate students. She also ran workshops helping incoming graduate students write narratives describing their goals and values. Many students submitted their writing as fellowship application essays. The practice helped “students from underrepresented communities adjust to and become comfortable in an academic culture that many of them found foreign,” the committee wrote.

Pribram-Jones, who is originally from East Palo Alto, California, and Rattner, who grew up in Maryland, will lecture on their research and receive honorariums and engraved awards at the DOE GSGF program review. They also will be featured in an article in DEIXIS, the DOE CSGF Annual, to be released at the meeting.