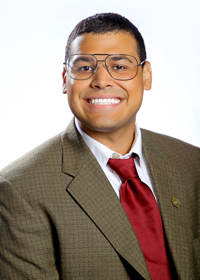 There has been a resurgence of interest in the interactions of free electrons with nanophotonic structures. Spontaneous emission by free electrons near nanostructures is being explored in the context of novel radiation sources from infrared to X-ray frequencies. One possibility that has remained unexplored is the possibility of nanophotonic light sources based on free-electron stimulated emission and consequently achieving laser-oscillation based on free-electron gain media. Such concepts have been widely explored at microwave frequencies, terahertz frequencies and even X-ray frequencies. Nevertheless, the physical process leading to laser-oscillation has always been driven by fields of wavelengths on the scale of a fraction of a millimeter or much longer. Using nanostructures for lasing in the optical spectrum has never been explored, possibly due to the stringent constraints concomitant with their small dimensions, such as the very low electron beam currents associated with the small beam sizes needed. Here, we develop for the first time a general theory of free-electron lasing, valid in general nanophotonic geometries. Based on this theory, we find state-of-the-art nanophotonic structures which allow lasing to occur with average electron beam currents as low as a few nanoamperes. Such a current is many orders of magnitude below that of any proposed or existing coherent free-electron light source, and renders possible the concept of a nanophotonic free-electron laser. In addition to the semi-analytical framework we develop, we also develop a computational framework to address nanophotonic free-electron lasers ab initio, enabling consideration of time-dependent lasing phenomena, low electron densities beyond the conventional theory, and an exact treatment of nonlinearities while taking into account the propagation of light in inhomogeneous media. Such a treatment reveals marked differences from the conventional theory.