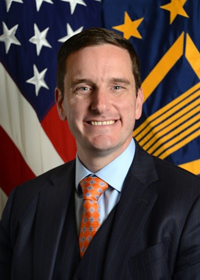 William Conley is the deputy director, Electronic Warfare (EW) within the Office of the Under Secretary of Defense for Acquisition, Technology and Logistics. In this role, he advises department leadership on electronic warfare capabilities. He also is the executive secretary for the Electronic Warfare Executive Committee. Conley previously was a program manager at DARPA, the Defense Advanced Research Projects Agency, in the Strategic Technology Office. At DARPA, he executed a variety of advances in distributed EW capabilities to improve electronic attack capabilities. He oversaw a variety of EW studies and led interdisciplinary strategy development. As a Navy engineer, Dr. Conley co-founded the Laboratory for Spectrum Technology Advanced Research at the Naval Surface Warfare Center – Crane Division. Dr. Conley earned a B.A. in Mathematics-Physics from Whitman College and a B.S. and Ph.D. from Purdue University, both in Mechanical Engineering.