How to Build a Bug 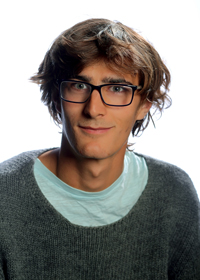 Recent advances in microscopy and computation have allowed for unprecedented quantitative study of cellular dynamics in developing organisms. We are focusing on the syncytial development of insect embryos, in which nuclei divide and move in a single shared cytoplasm. Specifically, we are interested in how nuclei move, how nuclei know where to move and how nuclei know what to become. We are working to answer these questions using lightsheet microscopy and a transgenic line of the cricket Gryllus bimaculatus whose nuclei are fluorescently labeled. We collect several terabytes of live-imaging data and then automatically segment and track the nuclei. This allows us to gain insight into key unanswered questions in early embryogenesis. Axial expansion is characterized by nuclei dividing and expanding throughout the embryo. Following axial expansion is embryonic coalescence, in which select nuclei move together to form the embryonic rudiment. We have quantitatively described the motion of nuclei throughout both axial expansion and coalescence of healthy cricket embryos. In addition to answering questions related to the movement of specific nuclei, we have shown that some nuclei are excluded from the embryonic rudiment much earlier than previously thought. We also use tools from computational geometry to study the motion of nuclei relative to one another, after cellularization has occurred. To understand the mechanistic details of our observations, we performed a variety of chemical manipulations to the embryo, each impacting specific functions. We then perform the same analysis that we did on the healthy embryos, allowing us to see which specific aspects of the nuclear movement were affected by a specific treatment. To facilitate the back-and-forth between experiment and analysis, we are working to improve a variety of the computational techniques. Additionally, we are working to simulate the cellularized region of the embryo using insights from our data analysis. Specifically, we are using our model to study questions relating to fate determination in early divisions.