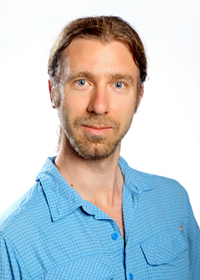 For many taxa and systems, species richness peaks at mid-elevations. One potential explanation for this pattern is that large-scale changes in climate and geography have, over evolutionary time, selected for traits that are favored under conditions found in contemporary mid-elevation regions. To test this hypothesis, we use records of historical temperature and topographic changes over the past 65 million years to construct a general simulation model of plethodontid salamander evolution in eastern North America. We then explore possible mechanisms constraining species to mid-elevation bands by using the model to predict plethodontid evolutionary history and contemporary geographic distributions. Our results show that models that incorporate both temperature and topographic changes are better able to predict these patterns, suggesting that both processes may have played an important role in driving plethodontid evolution in the region. Additionally, our model represents a proof of concept to encourage future work that takes advantage of recent advances in computing power to combine models of ecology, evolution and Earth history to better explain the abundance and distribution of species over time.