Models of Convectively Coupled Waves in the Tropical Atmosphere 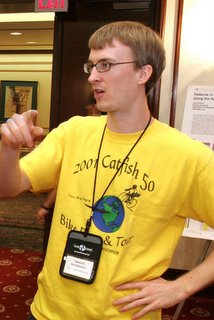 It is commonly known that El Niño, an oscillation in ocean temperatures in the Tropics, can affect the weather in the US. Another type of weather pattern in the Tropics can have a similar effect: convectively coupled waves. These waves involve oscillations between stormy and clear skies, and they are named “convectively coupled waves” because storms are essentially convection in the earth’s atmosphere. They have been linked, for instance, to droughts and floods in California and British Columbia.

While observations show the importance of convectively coupled waves, numerical weather and climate models do a poor job of representing them. The physical mechanisms of these waves are also poorly understood.

For my thesis work, I am studying simplified models for convectively coupled waves. With our models we are trying to identify the important physical mechanisms of the waves and obtain numerical simulations of the waves in idealized situations. The main new feature of the models is the use of three cloud types that roughly represent the life cycle of cloud systems, which has led to good agreement between the model and observations.