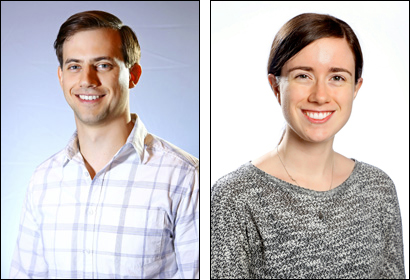 A theoretical plasma physicist and a computational biologist are co-winners of the 2018 Frederick A. Howes Scholar in Computational Science Award.

The honorees are Seth Davidovits, now a Department of Energy (DOE) Fusion Energy Postdoctoral Fellow at the Princeton Plasma Physics Laboratory, and Sarah Middleton, now with pharmaceutical maker GlaxoSmithKline. One or two recent graduates of the DOE Computational Science Graduate Fellowship (DOE CSGF) are chosen for the award each year in recognition of their research accomplishments and outstanding leadership, integrity and character.

Davidovits will receive an honorarium and engraved award and deliver a lecture at the DOE CSGF Annual Program Review in Arlington, Virginia, on July 16. Middleton will deliver her Howes lecture at the 2019 program review.

Davidovits, a fellow from 2010-14, earned his undergraduate degree in applied physics from Columbia University, where he first learned about modeling physical systems with computers. As a Princeton University graduate student, he developed new techniques to explore turbulent flow in plasma as it’s compressed – processes that occur in fusion experiments, in the generation of X-rays and in astrophysics. In particular, he described – through theory and computation – the interplay between turbulence and heat in these systems. Simulations he’s helped develop have shown that rapidly compressing flowing plasma quickly releases its turbulence as thermal energy, a phenomenon called sudden viscous dissipation. These results suggest ways to mitigate turbulence and harness it to boost efficiency in inertial confinement fusion and z-pinch experiments.

Middleton, a fellow from 2012 to 2016, discovered genetics and neuroscience as an undergraduate at The College of New Jersey and earned a double major in biology and computer science. As a doctoral student at the University of Pennsylvania, she examined how the folding and location of RNA – the cell’s genetic-information translator – in brain cells seeds learning and memory. In lab work, she examined individual mouse neurons and isolated and sequenced RNA molecules within. She used her computational skills to analyze the resulting data sets and created (with advisor Junhyong Kim) NoFold, a program that rapidly locates and groups complex RNA patterns that could represent cellular signals.

Middleton also worked to spread her computational skills among her graduate student colleagues, creating an eight-session boot camp for biologists, aimed at scientists without programming knowledge and experience. The workshop was so successful Middleton had to turn away interested students for each of the three years she directed it. Penn’s Institute for Biomedical Informatics now offers an annual version of the course. During graduate school, Middleton also helped to create an online computational biology and genomics curriculum for high school students.

Davidovits, a native of Andover, Massachusetts, says he was always interested in science and began tinkering with programming languages as a child. He recently won the 2018 Marshall N. Rosenbluth Outstanding Doctoral Thesis Award from the American Physical Society. The honor recognizes “exceptional young scientists who have performed original thesis work of outstanding scientific quality and achievement in the area of plasma physics.”

Middleton, a New Jersey native, now works on a range of drug-discovery problems at GlaxoSmithKline, from identifying genes that cause diseases to classifying disease subtypes.