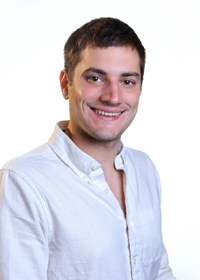 We extend to three dimensions a new projection method for simulating hypo-elastoplastic solids in the quasi-static limit. The method is based on a surprising mathematical correspondence to the incompressible Navier-Stokes equations, where the projection method of Chorin (1968) is an established numerical technique. We explore the method through numerical simulation of a three-dimensional continuum-level model of a bulk metallic glass based on the shear transformation zone (STZ) theory of amorphous plasticity. We test the method by simulating three-dimensional shear band nucleation and growth in materials undergoing simple shear. We consider several three-dimensional examples and contrast the dynamics of shear banding in these situations with previous two-dimensional studies. We consider the generation of physically realistic randomly distributed initial conditions in a relevant STZ internal variable and discuss relevance to experimental studies of shear banding. We also present a variation of the projection method based on a coordinate transformation that enables the implementation of boundary conditions through deformation of the grid itself. We demonstrate how this formalism can be used to implement several interesting cases with ease, such as Lees-Edwards boundary conditions commonly used in molecular-dynamics simulations, and pure shear boundary conditions.