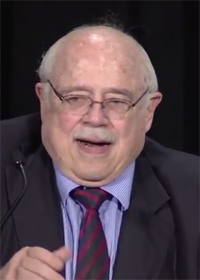 Michael L. Telson is Vice President for Energy programs at General Atomics of San Diego, California, in its Washington office.

From 2002-10, he was director of national laboratory affairs and science advisor for the University of California at its Office of Federal Governmental Relations in Washington. He was responsible for managing federal legislative issues involving the three national laboratories the university manages for the U.S. Department of Energy: Lawrence Berkeley, Lawrence Livermore and Los Alamos.

Dr. Telson previously served as DOE chief financial officer from October 1997, after Senate confirmation, through May 2001. He reported directly to secretaries Federico Pena, Bill Richardson and Spencer Abraham, advising them on all financial matters, including the preparation and execution of DOE's nearly $20 billion annual budget. He was at the DOE from January 1995 through May 2001. Before that, he served as advisor to the deputy secretary for science and budget issues.

Before joining the DOE, Dr. Telson served as senior analyst for energy and science programs on the staff of the House Committee on the Budget. He was responsible for reviewing the programs of the DOE, the NSF and NASA, as well as government-wide R&D policy. He was with the Budget Committee from 1975 to 1995.

Dr. Telson holds Ph.D., E.E., M.S. and B.S. degrees in electrical engineering from the Massachusetts Institute of Technology and a master's degree in management from the Sloan School of Management.

In 1973 he was selected for the first class of AAAS Congressional Science and Engineering Fellows and served on the staff of the Senate Energy Committee.

In 1999, he was elected AAAS Fellow “for distinguished contributions in the formulation of science and technology policies and budgets and in interpretation of these policies and budgets to the scientific community.” In 2004, he was elected a Fellow of the American Physical Society “for his contributions as both a senior congressional staffer, and a senior official in the U.S. Department of Energy, to the support of the physical sciences in the U.S.”

Dr. Telson was born in New York City, grew up in Cuba and is fluent in Spanish.