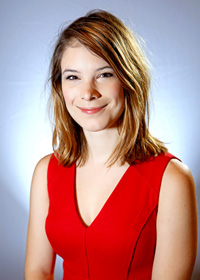 Loss of proprioception is known to severely impair motor control, but the neural mechanisms by which proprioception aids in the planning and execution of visually guided movements are not well understood. We investigate the impact of providing proprioceptive feedback to a human subject with tetraplegia and intact sensation who was implanted with two 96-channel microelectrode arrays in primary motor cortex (M1). Passive proprioceptive feedback was provided by moving the subject’s arm in an exoskeleton under BMI control. The modulation depth of M1 tunings for endpoint velocities decreases in the presence of proprioceptive feedback, despite insignificant differences in the variance of M1 spike trains between the visual only (VO) and visual and proprioception (VP) BMI feedback conditions. The broader tuning of M1 neurons in the VP condition results in diminished motor performance when using a standard BMI decoder conditioned on endpoint velocities. We show initial evidence that M1 neural activity in the VP condition is better modeled with the inclusion of a modulatory signal that is shared among the entire recorded M1 population, creating a global source of M1 correlation. The shared, modulatory signal reflects endpoint arm position, which provides one correlative measure of the muscle and tendon stretch measured by proprioceptive afferents. Therefore, successful closed-loop BMI with natural or surrogate proprioceptive feedback may require the development of new decoder models that account for endpoint arm position and population-wide fluctuations in the gain of M1 neurons due to input from somatosensory cortex.