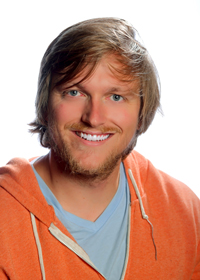 In everyday listening, the sounds from sources we seek to understand often are embedded in background noise. This noise alters the pattern of spikes in the auditory nerve, often to a profound degree. In order to recognize sources of interest, the brain must, to some extent, become robust to the effects of these background noises. To study the neural basis of listening in real-world background noise, we measured fMRI responses in the auditory cortex of eight human listeners to a broad set of 30 natural sounds presented in quiet and as embedded in 30 everyday background noises (e.g., a bustling coffee shop, crickets chirping, heavy rain hitting pavement). We quantified the extent to which neural responses were robust to background noise by correlating each voxel’s response to the natural sounds in isolation with its response to those same natural sounds mixed with background noise. We then squared this correlation coefficient to get a measure of variance explained and normalized it by the reliability of the voxel’s response, measured across split halves of the data. This measure quantifies the extent to which a voxel’s pattern of response across natural sounds is the same when the natural sound is presented in quiet and when it is embedded in noise. Responses in anatomically defined primary areas (TE 1.1 and 1.0) were substantially affected by background noise (r2 about 0.40). However, voxel noise-robustness increased with distance from these primary areas: nearby non-primary areas were slightly more robust, while more distal areas were hardly affected by the background noises (r2 about 0.85). Mean responses in primary and non-primary regions were both only slightly lower in the presence of background noise, indicating that this effect was not due to the background noises differentially suppressing responses in primary areas. Our results illustrate the neural basis of a core aspect of real-world listening and offer evidence of a potential hierarchy in human auditory cortex.