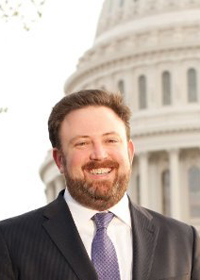 Paul Doucette is Executive Director of Government Relations at Battelle, the world’s largest nonprofit research and development organization. In addition to managing Battelle’s government relations team and overseeing the operation of the Battelle Washington Office, he is responsible for issues related to the Department of Energy’s Office of Science and the National Nuclear Security Administration, and advises corporate leadership and the directors of the Battelle-affiliated national laboratories on relevant policy and budget matters.

Before joining Battelle in 2008, Paul was Legislative Director and science and technology advisor to U.S. Representative Judy Biggert (R-IL), a senior member of the House Science and Technology Committee, former chairman of its Energy Subcommittee during the 108th and 109th Congresses, and co-founder of the House Research and Development Caucus. In this capacity, Paul worked closely with senior scientists and management at Argonne National Laboratory – located in Biggert’s district – to identify and advance the laboratory’s legislative priorities.

Paul joined Biggert’s staff in 1999 after serving as a legislative aide in the Washington, DC office of Illinois Governor Jim Edgar, where he was responsible for state-federal relations on energy and environmental issues. Originally from Rochester, Minnesota and now residing in Alexandria, Virginia, Paul received a Bachelor of Science in Business and Public Administration in 1997 from Drake University, and now serves on its Board of Trustees.