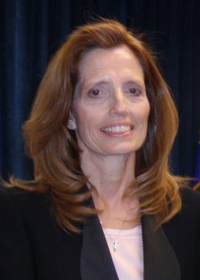 Dr. Kathleen Alexander, a member of the Senior Executive Service, is Assistant Deputy Administrator for Research, Development, Test and Evaluation for the National Nuclear Security Administration’s Office of Defense Programs. Previously she was the Director of Interagency Work for the National Nuclear Security Administration at the Department of Energy, where she oversaw work with partner agencies, technology transfer and other cooperative work agreements. She also served as sponsor of the Defense Programs Science Council and Executive Secretary for the Mission Executive Council, a four-part agreement between the departments of Defense, Energy and Homeland Security and the Office of the Director of National Security. Before taking that post, she was on assignment from Los Alamos National Laboratory as Senior Advisor to Dr. Steven Koonin, the Under Secretary of Science for DOE.

Kathleen was named a Fellow of ASM International in 1996 and of the American Ceramic Society in 2001. In 1997 the U.S. Junior Chamber of Commerce named her one of Ten Outstanding Young Americans. Kathleen also has received multiple Defense Programs Awards of Excellence (team awards). She served on the ASM International Board of Trustees from 2000 to 2003 and was Treasurer of the Microscopy Society of America from 1998 to 2004. Kathleen has more than 100 peer-reviewed publications in archival journals and conference proceedings with more than 1,300 citations. She also has two patents and received a technology transfer and licensing support award in 1993. She became a member of the federal Senior Executive Service in 2011.