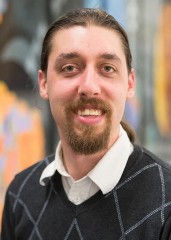 DOE CSGF alumnus Hal Finkel graduated from Yale University in 2011 with a Ph.D. in theoretical physics focusing on numerical simulation of early-universe cosmology. He’s now an Assistant Computational Scientist at the Argonne Leadership Computing Facility, where he helps develop the Hardware/Hybrid Accelerated Cosmology Code (HACC), a two-time IEEE/ACM Gordon Bell Prize finalist. Hal has designed and implemented a tree-based force evaluation scheme and the input-output subsystem and contributed to many other HACC components. He also has contributed to the LLVM compiler infrastructure project for many years and is currently the code owner of the PowerPC backend and the pointer-aliasing-analysis subsystem, among others. He is the lead developer on the bgclang project, which provides LLVM/Clang on the IBM Blue Gene/Q supercomputer, and represents Argonne on the C++ Standards Committee.