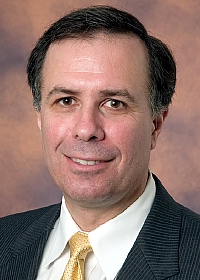 Dr. Dmitri Kusnezov received A.B. degrees in physics and pure mathematics with highest honors from the University of California, Berkeley. After a year of research at Germany’s Institut fur Kernphysik, KFA-Julich, he attended Princeton University and earned his M.S. in physics and Ph.D. in theoretical nuclear physics. He conducted postdoctoral research at Michigan State University and then became an instructor there. Dr. Kusnezov joined Yale University as an assistant physics professor in 1991 and became an associate professor in 1996. He has served as a visiting professor at numerous universities around the world and is a visiting researcher at Yale. Dr. Kusnezov has published more than 100 articles and a book. He joined federal service with the National Nuclear Security Administration in late 2001 and is a member of the Senior Executive Service. He currently serves as a Senior Advisor to the Secretary of Energy.