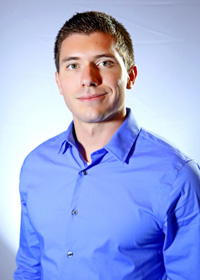 Taken together, ocean waves on Earth represent a 2TW power resource. This is a monumental amount of energy — comparable to the total global energy demand of humans — and its estimated that about 10-25 percent of this resource is harvestable for human consumption. Moreover, ocean wave energy converters (WECs) have been shown to capture much higher energy density than solar or wind energy devices and ocean waves have the appeal of being more consistent and predictable than sunlight and wind.

The WEC industry is in its infancy, with numerous prototype devices but no definitive industry leader or dominant device design. Major challenges include the expense of designing, deploying and testing devices and several high-profile device failures have had a negative effect on the perception and support of WEC research. Our work seeks to develop a robust and efficient method for computationally modeling ocean waves and their interactions with WECs. Such a method will allow for the prediction of wave forces on WECs and permit faster, cheaper device prototyping.

This presentation focuses on our ongoing development of a cut-cell embedded boundary method for moving boundary problems in the context of a highly parallelized software framework. The technique utilizes the narrow-band gradient-augmented level-set method to represent the moving boundary and adaptive mesh refinement on Cartesian grids. This talk will discuss the advantages of such an approach as well as some preliminary results.