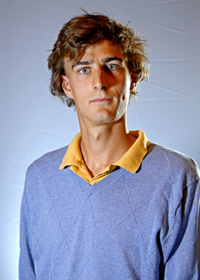 The process of embryogenesis, whereby cells in an embryo divide, pull and push on each other to eventually create an organism, presents many fascinating and unanswered scientific questions. For example, in insect embryogenesis, it is typical that the embryonic cells differentiate into two distinct tissues: one forming the organism (the embryo proper), and one forming extra-embryonic material. The relative sizes of these two tissues vary substantially from one insect species to another and the mechanisms behind the differentiation are unknown.

We are using lightsheet microscopy to study nuclear dynamics during embryogenesis of a transgenic line of the cricket <em>Gryllus bimaculatus</em> whose nuclei are fluorescently labeled. We image an embryo from four different views, taking optical stacks 90 seconds apart for up to 12 hours at a time, giving us an unprecedented view of embryonic development in this insect. From this data, we construct three-dimensional nuclear tracks, starting with tens of nuclei and ending with several thousand. The nuclei initially expand throughout the embryo and then coalesce into the embryonic rudiment. We compute a variety of measures of the nuclei, such as velocity, local geometric organization and division rate to understand how these correlate with development.

We are using these data to construct computational models for nuclear movement and division. Our first model treats each nucleus as a point and has been used to investigate the efficiency of how nuclei initially expand to fill the embryo. We are extending this to simulate the mechanics of the embryonic fluid, calibrating the model using rheological parameters measured in the experiments. In the future, we will use our observations to inform <em>in vivo</em> experimental manipulations of embryos, such as pharmacological cytoskeletal disruption, to see how modifications of specific parts of the cellular machinery alter the movement of nuclei.