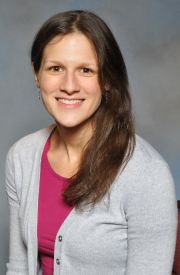 A cluster of seven indistinguishable Lennard-Jones particles was studied. Molecular dynamics was used to simulate the cluster dynamics, resulting in a representative sample of cluster configurations. This collection of configurations was then analyzed using diffusion maps. Similarity between configurations was calculated by comparing symmetric polynomials of the radial coordinates of each configuration, thereby making the similarity metric invariant to rotations and permutations of the particles. Calculating the similarity in this manner also was significantly faster than trying to find the optimal rotation that minimized distances between particles in different configurations; computing the various polynomials could be done once for each configuration, and so pairwise comparisons were only done between a few polynomial values, rather than over the coordinates of all the points. It was found that the system has several metastable configurations, with one-dimensional transition pathways connecting some, but not all, pairs of configurations. This work will aid in studying larger systems where the issues of rotation-invariance and indistinguishability make establishing a good metric difficult.