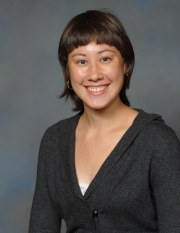 The gradual emergence of speech abilities in infancy involves a complex interaction of anatomical, physiological, neural, and social factors. Because speech is unique to the human species, the understanding that can be gained from animal models is limited. For these reasons, computational modeling is particularly important to the scientific study of the mechanisms underlying speech development. I describe a model of speech development, inspired by models by Guenther (1994), Westermann & Miranda (2002), Li et al. (2007), and Heintz et al. (2009). It consists of a neural network having a perceptual layer, a motor layer, and Hebbian connections between the two. In addition to these neural components, it invokes a speech synthesizer that models the human vocal tract as a fluid-containing tube whose walls are connected mass-spring units having properties that are determined by setting the activation levels of various muscles. Several variations on the model are compared. In one, the perceptual and motor layers experience self-organizing topographical organization in addition to Hebbian learning in the connections between the layers. In another version, the perceptual and motor layers are unchanging, with the Hebbian learning between layers being the only learning that occurs. Another comparison is between different types of input to the perceptual layer: in one version, inputs to the model are two-dimensional, representing the estimated first and second formants of a vocalization; in another version, high-dimensional representations of vocalizations in terms of their frequency spectra are used. Finally, I compare models receiving different amounts and types of external input. The models are evaluated in terms of their changing perceptual and motor representations, the vocalizations they produce in response to external input, and the vocalizations they spontaneously produce. Future directions to improve the sophistication of the model architecture and algorithm as well as to implement parameter searching for optimal model parameters are discussed.