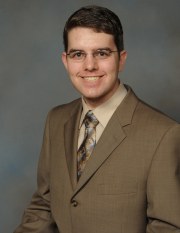 Vapor bubbles liberated during local boiling not only generate large sound pressures as they pulsate, grow and collapse, but also display a distinct tonal dependence characteristic of the local multiphase environment, much like the familiar fugue of water boiling on a hot stove or the sound of steak sizzling on a grill. Even at relatively low bubble void fractions, the strong variations in mixture sound speed and density are known to dramatically affect the propagation of sound in heat exchanger ducts and fuel bundle arrays in nuclear reactors. Thus, the sound of boiling provides a means to detect and predict the behavior of boiling in engineering systems. The propagation of sound through a wire-wrapped nuclear fuel bundle carrying an inhomogeneous multiphase mixture is examined. Pressure excitations applied at one end of the bundle propagate through this complex geometry and interact with the bubbly flow. The compliant, inertial and dispersive nature of the bubbly mixture is shown to generate purely flow-induced waveguides owing to variations in sound speed and geometry that act to support sound propagation along the fuel bundle in low impedance regions with amplified intensity and frequency relative to the original forcing. These results suggest that nucleate boiling in fuel bundle arrays transmits significant acoustic energy within a frequency band accessible to modern sensor technology. Acoustic detection of boiling is therefore a prime candidate for nuclear fuel surveillance technology. Further examples and applications of this theory to the optimization of sensor networks and microphone placement in nuclear reactors are briefly discussed and, in particular, the extent to which multiphase mixtures may be employed to focus or disperse pure tones and duct modes are clarified. Parallel scalability and simulation results used to guide this theoretical development on over 32K processors with several hundred million elements are also presented.