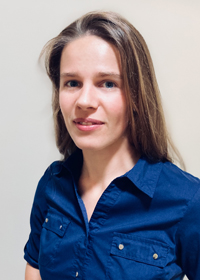 Wind-profiling lidar has grown in popularity as a cheaper, more easily deployable option for collecting observations of the atmospheric boundary layer in academic and industrial settings. Lidar instruments exploit the Doppler backscatter effect off of aerosols carried in the atmospheric flow to measure line-of-sight wind velocities along projected beams. Profiling lidars assume horizontal uniformity across the scan volume (delimited by the three to six angled beams which sample the flow) to reconstruct an estimate of the three-dimensional velocity from the LoS measurements. We have implemented a generalized offline virtual lidar in WRF-LES to sample simulated boundary layer flows as would be done by the instrument, allowing us to quantify and describe the behavior of the error in the measurements. We run an ensemble of virtual Leosphere WindcubeV2 profiling lidar in a range of idealized large eddy simulations (LES) in the Weather Research and Forecasting (WRF) model, spanning convective and stable flows. We compare the profiles measured by the virtual lidar with the actual reference wind profiles to quantify the errors arising from turbulence in the flow and further identify the mechanisms that lead to large or biased observation errors. In analyzing the errors, we disaggregate contributions to the observation error stemming from implicit averaging along the lidar beam in the line-of-sight velocity retrieval and due to turbulent fluctuations across the scan volume. The assumption of horizontal uniformity is routinely violated in flow in complex terrain, wind turbine wakes, or even homogeneous turbulence. We trace and quantify the effects of the turbulent variations in different homogeneous conditions on the error in reconstructed velocities as well as the horizontal wind speed and direction derived from the wind components and for time-averaged measurements. Vertical velocity variations emerge as playing a particularly important role, leading to larger error magnitudes and wind speed bias in convective conditions.