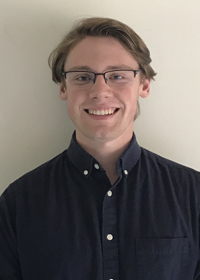 Observations of nonlinear coherent plasma phenomena in spacecraft and terrestrial experiments often rely on visual identification of solitary modes because nonlinear coherent modes are broadband in a Fourier transform based analysis. We implement an alternative spectral decomposition known as the Inverse Scattering Transform and demonstrate its ability to successfully isolate nonlinear modes on the homogeneous and forced Korteweg-De Vries equation which models these nonlinear modes. We also demonstrate for the first time that this decomposition is useful when forcing is applied. This is because the stable modes generated by localized forcing are similar to the homogeneous solutions where the Inverse Scattering Transform is a rigorous decomposition. This spectral technique is then applied to simulations of ion acoustic waves generated by a 10 mm spherical debris object interacting with the ionospheric plasma orbiting at 2000km altitude. The algorithm is found to successfully detect the resultant solitons. This demonstrates the feasibility of using this spectral technique as a real time analysis tool for screening spacecraft data for nonlinear solitary modes.