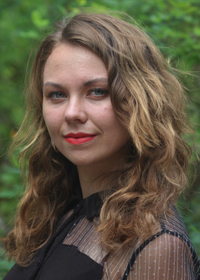 Atomization occurs when a liquid jet from a nozzle is discharged into a stagnant or moving gas causing the gas-liquid interface to become unstable and break up into a collection of droplets. A two-phase mixing layer between parallel streams of gas and liquid flows, prototypical of air blast atomizers, exhibits an interfacial instability that leads to the breakup of the gas-liquid interface and formation of droplets via primary break up and secondary atomization. To study atomization in a compressible flow regime, the objective is to simulate a simplified problem of a 3-D, planar two-phase mixing layer between a co-flowing liquid and high-speed gas stream. Simulations of multiphase flow are key for studying the two-phase mixing layer atomization because detailed measurements of liquid and gas-phase turbulence and interface evolution are extremely challenging. Key challenges associated with modelling the atomization process include representing large differences in fluid properties and resolving a large range spatial and temporal scales in the two-phase turbulent mixing layer. Localized artificial diffusivity (LAD) method is a diffuse interface method that combines explicitly adding artificial fluid properties to physical transport properties in regions around the two-phase interface and shocks with high-order compact finite difference schemes to produce stable, low-cost, and high accuracy simulations. The addition of interface-sharpening treatment allows the two-phase interface to remain sharp. This extended LAD method has the potential to accurately simulate the two-phase mixing layer with substantial density differences and shocks, but its performance in basic flows related to the two-phase mixing layer must be determined. The present work evaluates the performance of the extended LAD method in treating basic phenomena related to the breakdown of the gas-liquid interface through a series of model problems, including shear-induced breakdown of a temporal two-phase shear layer. In future the study would be extended to full three-dimensional flows.