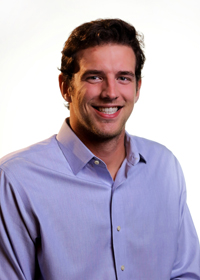 Recently, the center of a nearby galaxy was found to exhibit periodic optical flares about every 115 days, with the preferred explanation being a repeating tidal disruption event (TDE) dubbed &quot;ASASSN-14ko&quot;. To better understand this unprecedented discovery, we further investigate the host galaxy and find a late-stage galaxy merger with two nuclei and large-scale tidal features. The fainter secondary nucleus has high-excitation emission lines, such as [FeVII] and HeII, which requires a supermassive black hole (SMBH) to produce the requisite amount of high-energy photons. The brighter nucleus, which hosts ASASSN-14ko, also contains an SMBH surrounded by an asymmetric accretion disk. This asymmetric accretion disk supports the repeating TDE explanation for ASASSN-14ko, as each passage of the star will add material to the disk and produce the optical flare. However, an elliptical accretion disk around the SMBH can also explain the observed emission profiles and we discuss how to differentiate between these theories with further observations.