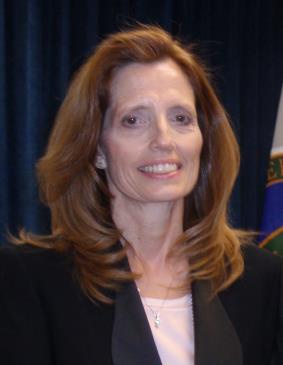 Dr. Kathleen Alexander is the Assistant Deputy Administrator for Research, Development, Test, and Evaluation for the National Nuclear Security Administration’s Office of Defense Programs. Previously she was the Director of Interagency Work for the National Nuclear Security Administration, at the Department of Energy. In that position, she oversaw work with other agencies, technology transfer and other cooperative work agreements. She also served as the sponsor of the Defense Programs Science Council, and Executive Secretary for the Mission Executive Council – a four-part agreement between Departments of Defense, Energy, Homeland Security, and the Office of the Director of National Security. Prior to that position, she was on assignment from Los Alamos National Laboratory, as Senior Advisor to Dr. Steven Koonin, the Under Secretary of Science for the Department of Energy. Kathleen was at Los Alamos National Laboratory for over 13 years. At Los Alamos, she held nuclear weapons program management positions as well as several division-level management positions in Materials Science & Technology, Applied Physics, and Hydrodynamic Experiments Divisions. Nuclear weapons programmatic management positions included: Hydrodynamic Testing, Pit Certification, Dynamic Materials Properties, Advanced Radiography, Enhanced Surveillance and Dynamic Plutonium Experiments. From July 2009-Dec 2010, she was a technical advisor in the Office of Defense Sciences of the National Nuclear Security Administration.

Prior to joining Los Alamos, Kathleen was at Oak Ridge National Laboratory for over 11 years. She was the group leader of the Microscopy and Microanalytical Sciences Group. Prior to being named Group Leader, she was a technical staff member performing high-resolution imaging and analytical electron microscopy studies of metals and ceramics.

Kathleen was named a Fellow of ASM International in 1996 and the American Ceramic Society in 2001. In 1997, she was named one of Ten Outstanding Young Americans by the U.S. Jr. Chamber of Commerce. Kathleen has also been awarded multiple Defense Programs Awards of Excellence (team awards). She has served on the ASM International Board of Trustees (2000-2003) and was the elected Treasurer of the Microscopy Society of America (1998-2004). Kathleen has over 100 peer-reviewed publications in archival journals and conference proceedings, with over 1300 citations. She also has two patents as well as a technology transfer and licensing support award (1993).