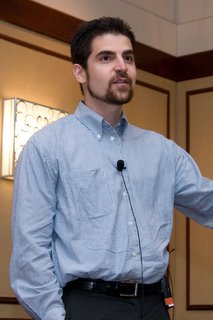 The fluctuation theorem of Evans and Searles quantifies the probability of observing violations of the second law of thermodynamics in small systems over short time scales. Specifically, it gives the probability of observing entropy-creating trajectories in relation to their corresponding entropy-destroying anti-trajectories in a dissipative, thermostatted non-equilibrium system. In this work, we use molecular dynamics to study a non-thermostatted assembly of driven colloidal particles in the presence of quenched disorder. We observe dynamical trajectories in proportion to time-reversed anti-trajectories according to an analog of the fluctuation theorem. Despite the fact that the system is out of equilibrium and not in contact with a thermal reservoir, we show that it is possible to determine an ‘effective temperature’ in the plastic flow regime.