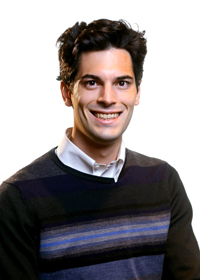 My research focuses on improving the microscopic calculation of statistical properties of nuclei from underlying nucleon-nucleon interactions. Statistical properties of nuclei, specifically the nuclear level density (NLD) and the gamma strength function, are crucial inputs for the Hauser-Feshbach theory of compound nucleus reactions. This theory plays a crucial role in basic research in stellar nucleosynthesis—the nuclear reactions that generate chemical elements in charge. Furthermore, the NLD and its dependence on the shape of the nucleus is a crucial input to the modeling of fission. Improving our understanding of the fission process is vital to the maintenance and development of nuclear technologies.

The calculation of statistical properties of nuclei is a challenging many-body problem. The configuration-interaction shell model provides an attractive framework for these calculations that accounts for both shell effects and important correlations. However, for mid-mass and heavy nuclei, conventional diagonalization methods become impractical due to the combinatorial increase of the number of many-particle states with the number of valence nucleons. One approach to address this challenge is mean-field theory. Although efficient, mean-field methods neglect important correlations and often break symmetries of the underlying Hamiltonian. On the other hand, the shell model Monte Carlo (SMMC) can yield exact results up to a controllable statistical error, but is computationally intensive. My primary is to explore theories between these two extremes that take into account some correlations beyond the mean-field but are less computationally intensive than the SMMC. One example is symmetry restoration projection in the mean-field approximation, which corrects to some extent the errors introduced by broken symmetries.

Another of my goals is to connect shell model Hamiltonians to more global underlying nuclear theories, such as density functional theory (DFT). Making such a connection would overcome the limited applicability of current shell model interactions to specific mass regions.