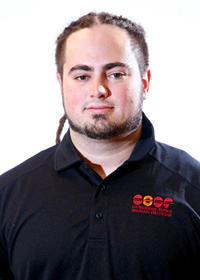 Computational neutron transport is a rich field based on the solution of the Boltzmann neutral particle transport equation. This is an integro-differential equation for the angular flux, which in steady state is a function of six independent variables. The algorithm presented here uses discrete ordinates for discretization of the two angular variables, linear discontinuous finite elements for the three spatial variables, and a multigroup formulation for the energy variable. Rather than parallelizing the solution using many central
processing units (CPUs), an algorithm is written for the efficient use of a graphics processing unit (GPU) to perform sweeps over the spatial and angular domain on a single compute unit (consisting of many processing elements). These sweeps are performed concurrently with each energy group assigned to a compute unit. The GPU used in this study is the NVIDIA GTX 870M. Preliminary results have found that run times for performing transport sweeps on this GPU can achieve a speedup of roughly 18.8 when compared to a single core of an Intel Core i7-4700HQ CPU.