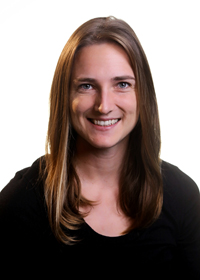 Melissa Queen first took computer science as a Dartmouth College freshman partly because her friends were taking the class. She immediately loved it and soon started planning four years of coursework to complete a major.

“Computer science is a really beautiful combination of mathematics, really satisfying rule sets and a huge amount of creativity,” the Department of Energy Computational Science Graduate Fellowship (DOE CSGF) recipient says. “You have a thing. You want it to operate a certain way. You have to figure out how to get there.”

Queen’s earlier science interests had centered on agriculture. She spent her early years in New Zealand, her father’s birthplace, where her primary school had livestock programs. The family moved to Oregon when she was 10, and Queen participated in 4-H, raising and showing sheep and horses.

As an undergraduate, Queen tried various research projects: engineering work on sea ice, both experimental and simulation-based physics, and even some theoretical computer science. “I learned that experimental research is not my thing,” she says, but there wasn’t another topic she wanted to dig into deeply.

So Queen took a job at Microsoft in 2013, where she built internal tools to help other developers’ workflows. She enjoyed the teamwork and collaboration but left after three years. While tutoring her younger sister in undergraduate computer science, she recognized “that moment of seeing something click” for someone else and decided to pursue a graduate degree.

For nine months, Queen and her partner traveled the southwestern United States in a teardrop trailer. As they stopped in various towns, she visited public libraries to file applications to computer science graduate programs and for the DOE CSGF. She finally returned to Seattle and the University of Washington.

For her Ph.D. research, Queen has focused on molecular computing: strategies for encoding equations and calculations via molecular arrangements rather than wires and electrical circuits. In Luis Ceze’s group, biologists, chemists, engineers and computer scientists work together on computational design challenges. Queen uses her computer science expertise to analyze data from colleagues in the wet lab and to work on problems, such as how to measure and compare energy consumption of traditional processors versus molecular systems.

One challenge: accounting for where and how energy is added to a molecular system, a very different process from electrical circuits. Many molecular computation systems use DNA, molecules that store and encode biological instructions. Interactions between DNA strands tend to release energy rather than store it, so Queen must account for factors such as the energy required to synthesize the molecules. Molecular processors are far from routine use but will most likely show up first as a part of cloud computing, particularly for data storage, Queen says.

The experience of delving into a new area for the summer was validating, Queen says. “Even if I don’t continue with molecular computing after my Ph.D., I can jump into other cool projects.” She’d like to return to NREL after she completes her degree in the spring of 2023.

Besides her research, Queen is involved with science communication and outreach through UW Engage, a program that teaches graduate students how to talk about their research to broad audiences. She took a course through the program and presented her research in early 2020 at UW Science Now, a graduate student partnership with Town Hall Seattle. She also serves on UW Engage’s board of directors.

Queen initially sought the DOE CSGF because she heard about its emphasis on community. “The program reviews are really motivating,” she says. “It’s also an amazing opportunity to meet with highly successful and super-smart graduate students who are also struggling with the Ph.D. process. Knowing you’re not alone and getting advice and support is also very important.”