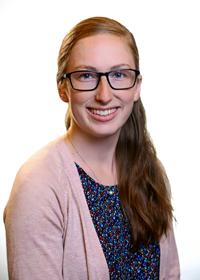 For Malia Wenny, part of chemistry’s fun comes from the interplay between laboratory experiments and computational tools, such as simulations and machine learning. The Department of Energy Computational Science Graduate Fellowship (DOE CSGF) recipient got her first taste of how the two approaches could work together as an undergraduate, and she’s kept her hands in both as a Harvard University graduate student.

At Haverford College, Wenny worked with chemists Alex Norquist and Joshua Schrier to mine results from thousands of experiments that Norquist’s team had done to synthesize novel materials. On the computational side, Schrier used machine learning to sift Norquist’s data – both the experiments that worked and those that didn’t – seeking patterns that would help them decide which materials to try next.

The team’s key questions, Wenny says: “How do we predict a new reaction? And when we try it, does it actually work?” Starting as a freshman, she worked on the experimental side, testing the algorithm’s predictions in the laboratory. She gradually did more computation, calculating the materials’ electronic structures. “They made a good mix that made for fun adventures in science,” she says. The team published the work in Nature.

At Harvard, Wenny has studied the behavior of ionic liquids, fluids that are entirely comprised of charged particles and that do not evaporate, with inorganic chemist Jarad Mason. She’s particularly interested in these unusual materials’ molecular structure and their gas solubility – their capacity to sponge up molecules such as oxygen, which could allow them to serve as artificial blood, as support fluids for tissue engineering, or as batteries or catalysts. She will collaborate with Boris Kozinsky on molecular dynamics simulations of these materials’ structures.

Wenny’s 2019 practicum forged a collaboration that has been critical to her Harvard work. She came to Argonne National Laboratory to learn more about water simulations from Giulia Galli and to work with Byeongdu Lee on small-angle X-ray scattering experiments on nanoparticle solutions at Argonne’s Advanced Photon Source. But one day as Wenny and Lee discussed her Harvard research over lunch, she mentioned that she needed to measure the compressibility of ionic liquids. Researchers hypothesize that the “squishier” the fluid is, the more gas it dissolves.

Small-angle X-ray scattering is an uncommon way to make such measurements, but Lee had used the technique to gauge liquids’ compressibility. Wenny has returned to Argonne twice since her practicum to study ionic liquid samples and has sent others for testing during the coronavirus pandemic.

Science runs in Wenny’s family. Her father is an ornithologist, her brother is a computer scientist and her mother teaches high school science, primarily chemistry. But Wenny developed her deep interest in molecules while attending the Illinois Mathematics and Science Academy, a public residential magnet high school just outside Chicago. “My teachers did an amazing job of building the fundamentals from the ground up,” she says. With each added layer of complexity, Wenny had the foundation to understand what was cool and interesting.

She got her first research experience during those years at Chicago’s Field Museum, where she studied bird-lice genetics and the organisms’ relation to their feathered hosts. While at Haverford, Wenny received a DOE Science Undergraduate Laboratory Internship and spent a summer at the National Renewable Energy Laboratory.

Wenny enjoys rock climbing. She also has played the violin since she was 6 and was in orchestras at both Haverford and Harvard.

After graduation, expected in 2022, Wenny may pursue a postdoctoral position and a research career at a national lab. She’s also considering seeking an academic post at a small college similar to Haverford, where she could help undergraduates get started in research.

Wenny appreciates the opportunity to meet and talk with other DOE CSGF recipients who have very different research goals. “The fellowship has generally shown me how broad science can be,” she says. “There are a lot of things out there, and computing touches them all.”