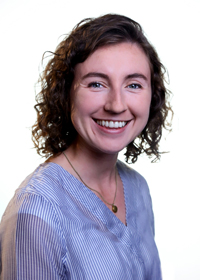 Backpacking, hiking and fishing with her family fostered a love of nature in Kari Norman as she grew up near Salt Lake City and visited grandparents in Wyoming.

Nonetheless, Norman, a Department of Energy Computational Science Graduate Fellowship (DOE CSGF) recipient, thought she would become an engineer or a mathematician, partly due to the influence of her father, who has a Ph.D. in theoretical mathematics.

But while in middle school, Norman attended a workshop sponsored by the Expanding Your Horizons Network, which hosts events with female scientists and engineers to encourage girls to pursue such fields.

A mammologist led the program. “That’s how I found out about ecology,” says Norman, now a doctoral student in the subject at the University of California, Berkeley. “I was like, what? You mean you can camp outside and sample mice and do that for a job and still do science?”

But another undergraduate experience changed her direction. She spent a semester at Finland’s University of Helsinki, where researchers use computers to study conservation prioritization – choosing areas where preservation would provide the most ecological benefit. At Utah State, Norman and Ethan White compared two types of data: global patterns academics focus on and observational surveys local wildlife managers use to prioritize conservation areas. They considered where ecological hot spots appeared in the data and how they did or didn’t match.

With DOE CSGF alumnus Carl Boettiger at UC Berkeley, Norman uses similar data but studies how to improve ecological measurements over time. The standard metric is species diversity: how many kinds of organisms are in an area at a given time. More recently, studies have found that whereas species number doesn’t change greatly, even where humans interfere, the kinds of organisms often do. To grasp ecological change, researchers deploy a newer measure, functional diversity, which analyzes how species vary and interact.

Species richness isn’t necessarily wrong, Norman says. “It’s more that we tried it, and it seems it’s not telling us the things we care about.” She wants to go beyond species number and identity to include “how they interact and the processes and functions that happen as a result,” such as maintaining ecosystem stability.

Functional diversity lets researchers summarize a species community in a single number describing traits – such as beak length or body size in birds – they think are vital to the creature’s ecological role. It’s attractive, Norman says, but requires extra information, some of which may be unavailable. She must gather time-series, global information that encompasses multiple human ecological impacts “and then say, OK, is functional diversity telling us a different story in any of these scenarios than what we were seeing with species richness alone?”

To complicate matters, the metrics can be biased, making it difficult to disentangle changes in the number of species from changes in their functions. To counter those effects, Norman uses null models, which correct for changes due to species additions or losses. She first explored the technique during her 2018 Oak Ridge National Laboratory practicum.

“A lot of my work goes into creating a workflow for processing these data from different sources, merging them with the trait data and creating null models so we can do it for a lot of data,” she says. She’s used the National Science Foundation’s Jetstream cloud computing system and local clusters.

Norman’s practicum switched from following species over time to tracking them through space or across communities. Using bird surveys, Norman compared trait metrics with null models to consider how and why species are in particular locations. For example, if the data shows more trait-based functional diversity than expected, there may exceptional competition for an ecological niche.

Norman’s models can help direct conservation. Under a standard model, “we may think certain areas are doing fine when in reality functional diversity changes are telling us this is not a good trajectory.”

Her research has given Norman a thirst for handling ecologic data. After graduation next year, she hopes to work in academia or with projects that compile species observations.

Meanwhile, she’s leading the UC Berkeley Expanding Your Horizons chapter, which stages workshops like the one that drew her to ecology.