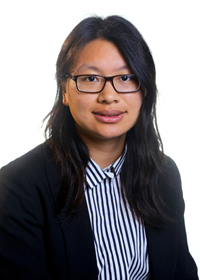 Annie Wei thinks practically but also likes to dig into intellectual problems. Those twin impulses compelled her to major in both computer science and physics at Harvard University. Her thinking: “I need this computer science degree to be employable, but I also want to study physics.”

Fortunately, Wei’s undergraduate research united the fields. With Alán Aspuru-Guzik, she worked on quantum algorithms that simulated molecules’ initial energy states and their evolution. The project sparked her interest in quantum information and quantum algorithms, the field she now studies as a Massachusetts Institute of Technology Ph.D. student and Department of Energy Computational Science Graduate Fellowship (DOE CSGF) recipient.

Wei credits her practical side to her parents, who were first-generation college students in China before immigrating to the United States. They studied engineering but now work on software. Their daughter learned to code at an early age with Terrapin Logo, an educational programming language, on a box-sized personal computer that used floppy disks.

Wei’s broad interests include reading and writing fiction and poetry, but math and science always were important. As an eighth grader, she relished the logic of writing geometry proofs line by line. As a high school junior, Wei was the youngest of just a handful of girls to take college-level physics. She loved seeing calculus applied to physical concepts such as electromagnetism and using math to model the real world.

That interest has continued at MIT. Quantum algorithms are especially well-suited for search and optimization problems, which involve either seeking a new solution or homing in on the best one in a sea of options. Such strategies have uses in machine learning and database searches, Wei says, but they also work well on problems in chemistry and physics, fields that are built on quantum mechanics.

Wei’s methods are designed to run on quantum computers, which use quantum bits or qubits. Instead of representing either one or zero like a classical computer bit, each qubit can have both values simultaneously. One qubit’s value can also influence its neighbors. These properties can boost a quantum machine’s potential computational power and efficiency.

Because today’s quantum computers are small and error-prone, Wei often uses high-performance computers to simulate quantum algorithms. A parallel programming course, part of her DOE CSGF program of study, has helped with her research, teaching Wei how to use MIT’s computer resources. Without the fellowship, she says, she probably wouldn’t have taken the class.

Wei has built quantum algorithms to solve several problems. One project focuses on particle smashers, such as CERN’s Large Hadron Collider. These giant instruments search for new subatomic particles, spewing mountains of research data and creating a software challenge for researchers who must sift the information.

The project started at MIT but Wei extended it during her 2019 practicum at Fermi National Accelerator Laboratory near Chicago. She learned more about the software particle physics researchers already use for simulations, helping her evaluate her research more deeply so it provides good answers to questions and works well on a quantum computer.

Wei also builds computing methods with both classical and quantum-mechanical parts, known as hybrid quantum-classical algorithms. These aim to harness the best features of standard computer processors or graphics processing units with those of qubits. The classical computer might pick the best parameters for a quantum calculation and then feed those data to a quantum system for evaluation in a feedback loop.

Wei’s graduate work has maintained the two key drivers that got her started: challenge and practicality. “The interdisciplinary nature is exciting. People are doing so many different things, but they are all related to quantum information ideas. It’s also a field with practical applications – connections to other areas in math, physics and computer science.”