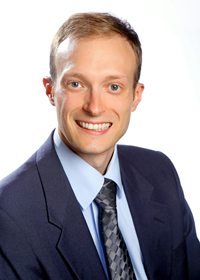 As is often the case for other Department of Energy Computational Science Graduate Fellowship (DOE CSGF) graduates, the program led Andrew Till to the position he now holds.

Till, a fellow from 2012 to 2016, is a staff research scientist in the Computational Physics and Methods Group at Los Alamos National Laboratory (LANL). He first connected with the lab on his 2013 practicum and through participation in the second DOE National Nuclear Security Administration Predictive Science Academic Alliance Program (PSAAP II). Till became a Nicholas C. Metropolis Postdoctoral Fellow at the lab and later joined the staff permanently.

“The prestige of the DOE CSGF opens many doors,” he says. “The practicum let me walk through those doors and meet the brilliant people inside.”

At LANL, Till develops, implements and tests numerical methods for the lab’s in-house deterministic thermal-radiation transport code, which is used for high-performance computer models of such things as nuclear reactor operations. The job lets him employ multiple skills he gained as part of the fellowship’s program of study. The required courses “gave me the vocabulary to talk to researchers in applied mathematics and computer science,” crossing disciplines to help maintain the group’s code.

Besides his work at the lab, Till also recently taught a junior-level course in nuclear reactor theory at his Ph.D. institution, Texas A&M University, fulfilling his ambition to work both at a DOE laboratory and in academia.

Just applying for the fellowship, Till says, can be useful, giving students the chance to “chart out the landscape of their field, their interests, and how they might advance computational science. Having a big-picture view is priceless, as is a productive relationship with their advisor.”