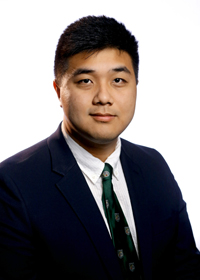 Over the last few decades, scintillation and Si-direct detection methods have been the most prevalent techniques to detect high-energy X-ray photons (20-50keV). However, inadequate efficiencies of those methods still remain a challenge. Recently, a two-layer design that consists of a high-Z semiconductor thin film on top of a Si layer has been proposed to remedy the low efficiencies.1 The top thin film, which is referred to as the photon attenuation layer (PAL), was computationally demonstrated with MCNP6.2 to lead to an effective X-ray photon energy attenuation down to or below 10keV to allow Si to undergo photoelectric absorption with a much higher absorption coefficient, resulting in a greater than 10 times quantum yield enhancement compared to Si direct-detection methods1,2].

To undergo experimental efforts, CMOS image sensor (CIS) chips have been manufactured. CIS chip post-processing recipes have been developed to safely reach Si on the CIS chip by removing PECVD oxide layers on the chip via i-line lithography and HF wet etching and to deposit PAL layers on Si via RF sputter deposition. Resist lift-off process required for post-deposition has also been developed. For computational studies, 1-micron PbTe was mainly used as the PAL layer but for experimental work, due to material unavailability and sputter chamber contamination concerns, 1-micron Bi2Te3, a high-Z material similar to PbTe, has been alternatively deposited as the PAL layer. Preliminary experimental efforts are in progress with the Amersham AMC.2084 source utilized as the high-energy X-ray source to characterize the post-processed CIS chips.