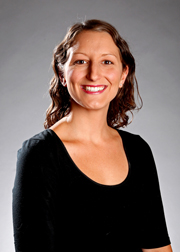 Kristen John works at NASA’s Johnson Space Center in the Astromaterials Research & Exploration Science (ARES) group as a NASA Postdoctoral Research Fellow. Her research involves studying the surfaces of asteroids and small planetary bodies, understanding the mechanical properties of meteorites and their parent bodies, mission/instrument concept development for robotic planetary exploration, and low-cost/small-sat development. She also is deputy project manager for two experiments selected to go on the International Space Station by the end of 2015, including one that will fly the first-ever DNA sequencer in space and another that will study regolith stratification in microgravity.

Kristen also is involved in mission work, including support for the Asteroid Redirect Mission (ARM) concept in regards to proximity operations. ARM aims to visit an asteroid, redirect its trajectory and bring a boulder off the surface back to a lunar orbit for future exploration. She also is involved in a joint asteroid mission between NASA and ESA and the NEEMO-20 Mission. NEEMO (NASA Extreme Environment Mission Operations) is an analog project that sends astronauts to an underwater lab. She is involved with tool development, science operations and support and EVA planning. Kristen also was chosen as commander of an analog “mission” called Human Exploration Research Analog (HERA). During this 14-day mission to an asteroid she and three other people were locked in a 150 cubic-meter habitat.

Kristen received her Ph.D. in aerospace engineering in 2014 from the California Institute of Technology, where she studied the strength of materials through laser compression experiments and simulations. Her advisor was G. Ravi Ravichandran. She was supported by the DOE NNSA SSGF Fellowship and performed research at Lawrence Livermore National Laboratory and the University of Rochester's Laboratory for Laser Energetics. Kristen also received an aerospace engineering masters in 2010 from Caltech, where she studied fracture mechanics. Kristin received a B.S. in 2008 from the University of Texas at Austin, where she performed undergraduate research on electromagnetic railguns with Hans Mark. She was a co-op for two semesters at United Space Alliance, performing space shuttle operations for NASA’s Johnson Space Center. During a summer at NASA Ames Research Center she worked on the design of a heat shield for the Crew Exploration Vehicle.