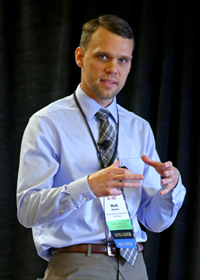 The focus of the inertial confinement fusion (ICF) program at Sandia has shifted from indirect drive x-ray sources to direct-drive magnetically driven implosions (MDIs). Direct-drive MDIs are appealing because they are energy rich and relatively efficient at coupling energy to the fuel. In particular, the ICF team is investigating a magneto-inertial fusion concept called magnetized liner inertial fusion (MagLIF).

In MagLIF, a cylinder of fusion fuel with a pre-imposed axial magnetic field is heated by the Z Beamlet laser and imploded by the Z Machine. Laser heating of the fuel is necessary to reduce the requisite implosion velocity and convergence ratio of the target, and the axial magnetic field is required to inhibit radial thermal transport and confine charged fusion products at stagnation.

A series of experiments were recently conducted to evaluate this concept. These experiments used a 10 T axial magnetic field, 2.5 kJ of laser energy, 20 MA of drive current, and deuterium gas as a fuel. Despite a relatively slow liner implosion velocity (70-100 km/s), the fuel reached a stagnation temperature of 3 keV, and the targets produced up to 2e12 thermonuclear neutrons. Additionally, 5e10 secondary DT neutrons were observed, which indicates the targets were significantly magnetized at stagnation. These results demonstrate the promise of the MagLIF concept, which will continue to be explored experimentally.