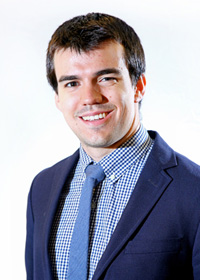 The nuclear shell model is a theoretical framework that describes the nucleus in terms of single-particle energy levels occupied by protons and neutrons. The spectroscopic factor (SF) of a nucleus in a given state quantifies the single-particle occupancy of the state's valence nucleons. Consider, for example, that the ground state of calcium-42 can be accurately modeled by a single neutron on top of an inert calcium-40 core. In this case, the neutron is fully occupying a single-particle orbital and the spectroscopic factor of calcium-41 is 1. In other nuclei, interactions between the valence nucleon(s) and nucleons in the core can reduce the state's single-particle occupancy and therefore its SF.

SFs, in principle, are directly related to the structure of a specific nucleus. Therefore, measurements of a given SF with different techniques should provide consistent answers. However, SFs for argon isotopes extracted via the knockout reaction technique (where the single nucleon is "punched" out of the nucleus) differ from SFs for the same systems extracted using the transfer reaction technique (where the nucleon is transferred to another nucleus). This is like two astronomers looking at the same star with different telescopes and seeing conflicting results: somebody's telescope is broken!

In an attempt to clarify this mystery, my research group (led by Michigan State University professors Betty Tsang and Bill Lynch) measured (p,d) transfer reactions for argon-34 (proton-rich) and argon-46 (neutron-rich) at the National Superconducting Cyclotron Laboratory, a particle accelerator for studying exotic isotopes. We repeated the transfer measurement using the same beam energy (70 MeV) as was used for the knockout measurements. The results of the SF analysis will be compared to the previous transfer experiment done at a lower beam energy (E/A = 35 MeV) as well as to the knockout results.

Abstract Author(s): J. Manfredi on behalf of the HiRA collaboration