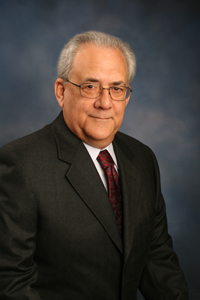 Dr. James (Jim) Corones founded the Krell Institute in 1997. He has an extensive career in academia, research and government laboratories. He holds an Sc.B. in physics from Brown University, and a Ph.D. in physics from Boston University with an emphasis on mathematical physics. He began his academic career as an assistant professor at Iowa State University in 1973 and was promoted to professor in 1982. From 1978 through 1997 Dr. Corones held various research and administrative posts at the Ames Laboratory, an ISU-managed Department of Energy facility. His administrative posts included program director, applied mathematical sciences; program director, environmental technology development; deputy director; and acting director.

His research interests have been in the areas of linear and nonlinear wave propagation including extensive work in acoustic and electromagnetic inverse scattering problems. He conducted this research under the auspices of the Department of Energy, the Office of Naval Research, the Air Force Office of Scientific Research and the National Science Foundation. Dr. Corones has been a Fulbright Fellow and twice a National Academy of Sciences Exchange Scientist. He has served on a variety of editorial and advisory boards.