From Janus to Z to the Moon and Mercury: Laboratory Shock and Release Experiments to Study Giant Planetary Collisions 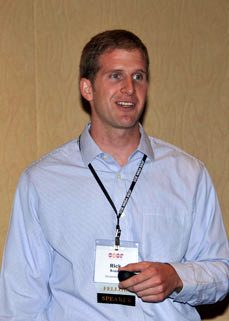 The final stage of planet formation is punctuated by a number of giant planetary collisions. These collisions generate shock pressures that result in abundant melting and vaporization. Understanding the process of shock-induced vaporization is a key part of testing the giant impact hypotheses for the formation of the moon and the loss of Mercury’s mantle. However, the liquid-vapor curve of most materials is an elusive part of the phase diagram, as static techniques cannot reach the high temperatures and pressures near the critical point of most insulators and many refractory materials. Shock and release experiments are currently the best method for studying states up to and over the critical point. My collaborators and I used shock and release experiments to probe the liquid-vapor curve of SiO2, the dominant phase in Earth’s crust. At Janus, 1-3 Mbar planar-supported shock waves were driven through quartz by direct laser ablation. The temperature of the fluid released to the liquid-vapor curve was measured using a streaked optical pyrometer and the average density of the mixed phases was determined from stagnation against a standard window. I also will present preliminary results on the liquid-vapor curve of MgO, a dominant phase in the Earth’s lower mantle. The density along the liquid branch of the liquid-vapor curve of MgO was determined using shock, release, and stagnation experiments on the Z machine at Sandia National Laboratory. With dedicated time at the Z machine in the next six months, we will probe the density and temperature along the liquid-vapor curves of MgO and Fe. Using available thermodynamic data, we also have developed models for the entropy along the Hugoniots of MgO and SiO2, which we use to derive criteria for shock-induced vaporization of MgO and SiO2 during planetary impact events.