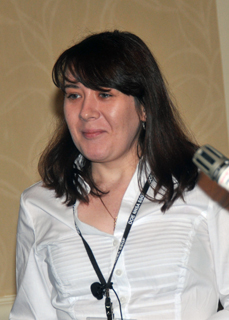 The need for large-size detectors for long-range active interrogation detection has generated interest in water-based detector technologies. Active interrogation is done using external radiation sources to induce fission and to detect, identify, and characterize special nuclear material (SNM) through the gammas and neutrons emitted. The sensitivity of such a detector depends on a large solid angle because of the long-range detection. Use of electron linear accelerators in active interrogation causes a "flash" of low-energy gamma radiation which is incident on the detectors in operation. An advantage of Water Cherenkov Detectors (WCDs) is their ability to reduce this low-energy background radiation and to promptly recover from such a flash. A large-size WCD capable of gamma ray detection and particle energy discrimination was designed and built. The detector was shown to successfully detect gamma rays of energies above the Cherenkov threshold. The detector was able to discriminate between various sources, such as 60Co and 232Th, even though WCDs are known for their poor energy resolution. Demonstration of event reconstruction capability of the detector system was a large part of the design and analysis. A full-detector model was created using the Geant4 simulation toolkit. The performance of the detector was predicted using the model and then experimentally verified. Qualitative agreement between the model and the experiment was observed. Event reconstruction was an important part of the detector performance analysis. Post-experimental data processing was done using ROOT. The detector design and analysis was completed, and it was demonstrated both computationally and experimentally that it is possible to use WCD to detect and characterize gamma rays.