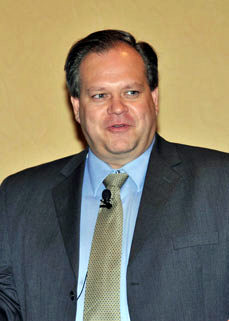 Dr. J. Bradley (Brad) Beck joined Los Alamos National Laboratory (LANL) in 1992.  In the past 20 years, Brad has worked in the Inertial Confinement Group, the Thermonuclear Applications Group, the Primary Design Group and in the National Security Office.

From 2000-2005, Brad served as the Deputy Group Leader for the Thermonuclear Applications Group.  After a eight-month temporary assignment to the Advanced Simulation and Computing NNSA Program Office in Washington, DC in 2005, Brad returned to LANL and was named as the Deputy Group Leader of the Primary Physics Group.  Brad was in this role and also served as a group leader for the weapons design group 1 from 2005-2010.  During this period of time, Brad was responsible for the Level 1 milestone for Pit Lifetimes and also had responsibility for the LANL staff who designed the Reliable Replacement Warhead primary.

In 2000, Brad joined the National Security Office at LANL which serves as an interface between the nuclear weapons policy experts and the technical experts at LANL.