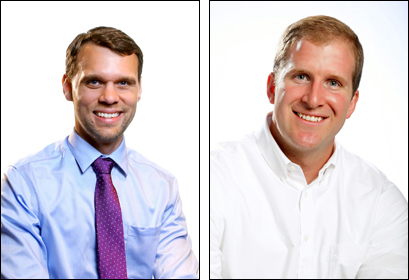 Two alumni of the Department of Energy National Nuclear Security Administration Stewardship Science Graduate Fellowship (DOE NNSA SSGF) are among those honored with a 2019 Presidential Early Career Award for Scientists and Engineers (PECASE).

Matthew Gomez, a physicist at Sandia National Laboratories, New Mexico, and Richard Kraus, a research scientist at Lawrence Livermore National Laboratory were on the list of honorees the White House issued on July 2. The Department on Energy nominated them for the prize.

Gomez, a fellow from 2007-2011, was recognized for his “leadership and contributions to innovative research in high energy density physics” and experiments in magneto-inertial fusion, which squeezes atomic nuclei with enough magnetic force to merge them, producing energy. He also was chosen for serving as a role model for and his commitment to developing a community of scientists and engineers.

Gomez also recently received the 2019 Institute of Electrical and Electronics Engineers’ Nuclear and Plasma Sciences Society Early Achievement Award. The honor “recognizes excellence in technical contributions to the fields of nuclear and plasma science that take place during the first 10 years after the honoree completes their degree,” a Sandia release said. Only one person is chosen for the award each year.

Kraus, a fellow from 2008-2012, was chosen “for advancing the field of materials science, planetary science and material issues that are critical to the nuclear security mission, through elegant and innovative design, analysis and understanding of dynamic compression experiments using gas-gun, magnetic compression, and laser sources.” He is one of four Livermore Laboratory scientists receiving the award this year.

Established in 1996, the PECASE acknowledges the contributions of researchers to advance science, technology, engineering and mathematics education and to community service through scientific leadership, public education and community outreach. The White House Office of Science and Technology Policy coordinates the PECASE with participating departments and agencies.