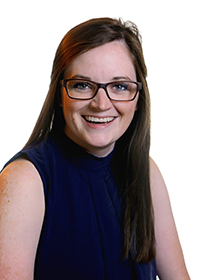 When Erin Nissen joined chemist Dana Dlott’s group at the University of Illinois at Urbana-Champaign, she intended to focus on water’s properties under extreme conditions.

An undergraduate astrophysics class at Colorado Mesa University led to Nissen’s fascination with the strange behavior materials exhibit under the pressures and temperatures found inside planets and in other situations.

“Things that we think we know so much about at ambient conditions,” such as water, “will do radically different things in these extreme conditions,” says Nissen, a Department of Energy National Nuclear Security Administration Stewardship Science Graduate Fellowship (DOE NNSA SSGF) recipient. “We don’t know some of the basic things that are going on.”

But after two years of refining her water experiment, a key diagnostic device broke. Repairs – in Japan – consumed 18 months.

Nissen’s experiment produces tiny detonations. A laser pulse disintegrates an aluminum foil 25 microns (millionths of a meter) thick. (A human hair ranges from 17 to 181 microns in diameter.) This produces a powerful discharge that launches an aluminum plate, just half a millimeter across and 25 microns thick, at speeds of up to 4.5 kilometers per second.

The plate crashes into a well, just 2 millimeters across and sealed with a thin aluminum film, containing nitromethane. Instruments that measure velocity and temperature and take high-speed images track the resulting explosion.

For a November 2020 Combustion and Flame paper, Nissen, Dlott and Mithun Bhowmick, now at Miami University of Ohio, used the apparatus to follow detonating nitromethane. The explosion took place in two stages, starting just nanoseconds after the plate hits the liquid. The initial brief jolt would have decayed except for shocks from the chemical explosion behind it. The two merged into a powerful shock strong enough to sustain the detonation. 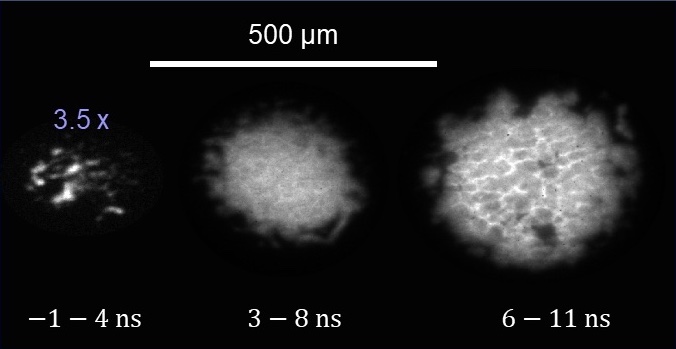 What’s more, imaging found the detonation took on a grid-like cellular pattern – something researchers had speculated existed but that Nissen believes no one had previously captured in liquid nitromethane. She and her colleagues also found that changing the experiment’s conditions changed the grid size.

That detonation is “creating these beautiful cells over and over again at the exact same point in the reaction” shows it’s fundamental to the reaction’s nature, Nissen says.

The experiment was possible only because Nissen overcame a significant obstacle: creating the nitromethane wells, or cuvettes, that the flyer plates strike. She tested multiple ideas before applying a simple piece of polymer tape, from 25 to 90 microns thick, to a glass plate. A laser drilled 2-millimeter-diameter holes in the tape. Nissen floated a layer of nitromethane over the holes, filling them, then covered them with aluminum before squeezing out excess liquid and sealing each cuvette.

Another obstacle: convincing the explosives research community that the experimental apparatus produced valid results. Most such trials use bigger facilities, from gas guns to Sandia National Laboratories’ massive Z pulsed power machine. “People didn’t think we were going to be capable of producing a detonation on our tabletop system,” Nissen says. Now researchers visit the lab to study the setup.

Nissen did get to research water – on her 2018 practicum at Sandia’s New Mexico campus. With Daniel Dolan, she studied the formation of ice VII, found only under high temperatures and pressures that break apart water molecules. Oxygen ions freeze into a repeating lattice while hydrogen ions float around it, making the material electrically conductive.

Nissen and Dolan concentrated on the effects of two parameters: initial temperature and ramping up pressure gradually – albeit over nanoseconds. They used Thor, a device whose brief, powerful electric discharges generate magnetic fields that produce tremendous pressures.

Nissen and Dolan repeatedly compressed tiny samples of water at varying temperatures and at ramp rates that reached maximum pressures of around 7 to 9 gigapascals – 70,000 to 90,000 times that of Earth’s atmosphere.

The practicum exposed Nissen to a range of science and to the national laboratories. It also reinforced her interest in further research into water and other materials under extreme conditions – work she plans to pursue in a postdoctoral post after graduation in spring 2021.

Image caption: Time lapse images, left to right, taken over a 5-nanosecond period of thermal emission produced as a flyer plate traveling at 3.7 kilometers per second struck nitromethane. Hot spots coalesced into a uniform shock front that evolved into a structured front with cells that averaged 26 millionths of a meter in size. Credit: Erin Nissen.