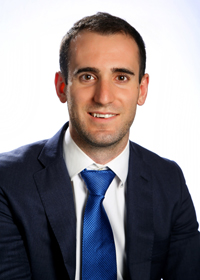 A Department of Energy National Nuclear Security Administration Stewardship Science Graduate Fellowship (DOE NNSA SSGF) alumnus is part of a team that has calculated properties of the subatomic stew that existed briefly at the universe’s birth.

Researchers have recreated this quark-gluon plasma (QGP) by crashing subatomic particles together in huge particle accelerators, but only for exceedingly brief periods and at minuscule scales. Understanding its properties are key to grasping the universe’s origins.

Duke University researchers, including DOE NNSA SSGF alumnus John Scott Moreland, combined data from the Large Hadron Collider (LHC), the world’s biggest particle-smasher, with computational models to calculate the QGP’s specific shear viscosity. The estimates, which measure the QGP’s temperature-dependent ability to flow, show that it is the most ideal liquid ever created, with the smallest viscosity ever seen in nature.

The research, in collaboration with fellow Duke Ph.D. student Jonah Bernhard and with Moreland’s advisor, Steffen A. Bass, was published August 12 in the journal Nature Physics.

The QGP is an extremely hot (a trillion times hotter than the core of the sun), dense phase of matter comprised of quarks and gluons, components of the protons and neutrons found in atomic nuclei. The entire universe was in a QGP state for a few microseconds after the Big Bang.

Scientists can produce a QGP, the hottest substance ever created in a laboratory, by colliding heavy atomic nuclei. But because its lifespan is extraordinarily brief and small, they can only infer its existence by measuring the particles it emits and matching those data with computational models. Other researchers have previously found ranges for the QGP’s shear viscosity, but with large uncertainty.

The Duke researchers, using 3 million core hours of computing time, calculated new estimates of QGP properties that they say are the most precise yet. They applied Bayesian parameter estimation techniques, which update the probability of an outcome as more information becomes available, to a dynamical collision model and a variety of experimental data. They compared their predictions with an extensive LHC data set.

The results, Bass said, show the QGP specific viscosity is 10 times smaller than that of liquid helium, a superfluid that flows with minimal friction.

Moreland, who earned his physics doctorate from Duke earlier this year, was a fellow from 2012-2016. He is now an associate data scientist at IQVIA, a healthcare information analytics company.