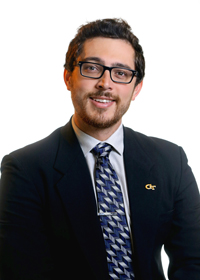 Ever since he saw a science documentary about Los Alamos National Laboratory as a teenager, Travis Voorhees had dreamed of working at a Department of Energy (DOE) national laboratory. “But I never thought it would be realistic,” he says. Yet less than decade later, his Ph.D. research took him to Los Alamos for several months each year, thanks to support from a DOE National Nuclear Security Administration Laboratory Residency Graduate Fellowship (DOE NNSA LRGF).

A serious athlete, Voorhees played football and ran track during high school and competed as a decathlete and pole vaulter at California State Polytechnic University in Pomona until a partially torn Achilles’ tendon curbed his athletic pursuits. Voorhees turned toward research, building on an interest in materials that came from watching and working with his father, a master goldsmith. With engineering professor Vilupanur Ravi, he sought ways to improve the durability of biomedical joint implants past their current 20-year lifespan. “A silver lining of getting injured was that I found something else that I got really interested in,” he says. Ravi introduced Voorhees to his Ph.D. advisor, Naresh Thadani at the Georgia Institute of Technology.

For his graduate research, Voorhees studied how brittle, granular materials, such as soils and concrete, behave under intense shock compression. Current models don’t provide accurate, detailed information about their transition from individual grains to a dense solid. Voorhees investigated continuum compaction models that simulate materials as individual grains are crushed together in a block. His goal was to predict compaction behavior.

To calibrate such models, Voorhees also needed better experimental data. Many compaction models have been calibrated with results from one-dimensional trials but applied to scenarios that occur in three dimensions. So Voorhees combined experimental and computational research to understand what happens as grains are compressed during extreme shocks. The work is part of an ongoing collaboration between Thadani’s Georgia Tech laboratory and Anthony Fredenburg’s Los Alamos group.

At Georgia Tech, Voorhees used gas guns for high-precision and high-fidelity shock compaction experiments. Considering factors that can introduce error, from varying fiber-optic cable lengths to nonuniform powder thickness, he reduced experimental uncertainty to 1 percent or less from 5 to 50 percent.

At Los Alamos, Voorhees focused on improving computational models’ accuracy. To correct problems with existing models, he and his colleagues included factors that other scientists have ignored.

Brittle materials typically display high strengths, Voorhees notes. That strength should create some resistance to shear loading, internal forces that can cause the materials to deform. “We’ve begun investigating how to couple compaction and strength models for granular materials. Then we’ll be able to incorporate shear loading,” he says.

The goal is to apply such models to understand more realistic scenarios, such as mining explosions, a meteorite impact on Earth or blocking bullets with sandbags.

Voorhees finished his Ph.D. in 2020 and now is a mechanical engineer in research and development at Sandia National Laboratories’ campus in Livermore, California.