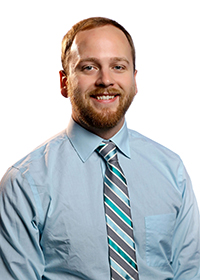 In fall 2019, Dane Sterbentz’s commute to Lawrence Livermore National Laboratory (LLNL) was just over an hour (if traffic was light). With support from a Department of Energy National Nuclear Security Administration Laboratory Residency Graduate Fellowship (DOE NNSA LRGF), the University of California, Davis, doctoral student was working with researchers there to improve computational models for phase transitions (liquid to solid, for example) under extreme pressures and temperatures.

By spring 2020 – and through a second residency that summer – Sterbentz’s commute was less than five minutes, working remotely under pandemic restrictions.

Fortunately, he could do most of his research from home, using supercomputers and other LLNL resources. More importantly, the residencies let Sterbentz collaborate with top experts in modeling high-energy-density physics and gave him access to experimental scientists whose data helped validate and improve his simulations.

With two engineer parents (his father recently retired from the Idaho National Laboratory, INL), Sterbentz grew up steeped in science and technology. He served multiple INL internships as an Idaho State University undergraduate and worked there for two years.

Sterbentz enjoyed working at INL but wanted to explore computational physics modeling and simulation more deeply. He pursued a Ph.D. and was drawn to UC Davis and advisor Jean-Pierre Delplanque, who had research connections with LLNL.

Those contacts led Sterbentz to residencies with LLNL scientists Philip Myint and Jonathan Belof and the modeling project. “It was fascinating to me” to simulate “how liquid water can be compressed and transition into this entirely new phase of ice that’s actually denser than liquid water and can exist at high temperatures.”

Sterbentz wants to predict how phase transitions happen when a liquid, such as water, is dynamically compressed, with pressure ramped up steadily or applied via multiple shocks. His test case is ice VII, a phase found on oceanic exoplanets and in other astronomical settings, but also in experiments that rapidly squeeze water, forcing molecules into a repeating, cubic lattice.

Scientists often assume that a liquid changes phase at about the pressure and temperature at which it crosses a boundary into the phase diagram’s solid regime. Experiments, however, have found the transition can lag by millionths of a second and actually can occur at a much higher pressure. Because experiments compress the water so rapidly, it remains in a metastable liquid stage, “where you’re still in the liquid phase but really have all the conditions necessary” to form the solid phase. The reason: Phase transition kinetics dictate the magnitude of an energy barrier water molecules must overcome to form a stable cluster of solid molecules, a process called nucleation. These solid clusters can then grow to complete the transition.

Researchers have commonly used empirical models with little predictive capability to approximate the transition point. With Myint and Belof, Sterbentz wants to shift to physics-based kinetic models rooted in classical nucleation theory. He modeled the transition’s transient kinetics – the molecules’ shifting interactions – with an equation that calculates changes in the population density of ice VII clusters. The simulations, described in an October 2019 Journal of Chemical Physics paper, found transient kinetics may have played only a small role in the experiments’ phase transitions. Interfacial free energy – the energy involved in disrupting bonds between molecules – may have had more influence.

The team’s code can calculate liquid-to-solid transitions for many materials. More recently, Sterbentz and Myint have worked on developing a better interfacial free-energy model.

In another project, Sterbentz strove to more precisely calculate the pressure exerted on apparatus containing water and other materials in shock- and ramp-compression experiments. For technical reasons, researchers typically measure pressure only as it emerges at the experiment’s back end. But “you really need an accurate estimate for this incoming drive pressure to precisely simulate the compression hydrodynamics, which have a big effect on the development of the phase transition,” he says.

Sterbentz used ARES, an LLNL hydrodynamics code, to simulate Nissen’s experiment and paired it with an optimization algorithm that seeks the problem’s best solution from myriad options. The algorithm varied drive pressure values through multiple simulations until it found ones that produced output pressures matching real-world results.

Because the approach doesn’t explicitly simulate the pressure-producing drive mechanism, it’s widely applicable to other compression experiments. The project led to a 2020 Journal of Applied Physics paper.

Sterbentz finished his dissertation in December 2020 and soon after started an LLNL postdoctoral research appointment – still remotely. His long-term goal is a staff job there or at another national laboratory.

Image caption: Dane Sterbentz models experiments in which phase transitions are believed to primarily happen through homogeneous nucleation, which occurs within liquid water bulk when the molecules arrange into a stable solid cluster, as seen on the left. In dynamic-compression experiments (right), pressures tens of thousands of times the Earth’s atmosphere push liquid molecules toward solid nucleated clusters, leading to rapid growth and a phase transition that can occur in less than a microsecond. Credit: Dane Sterbentz.